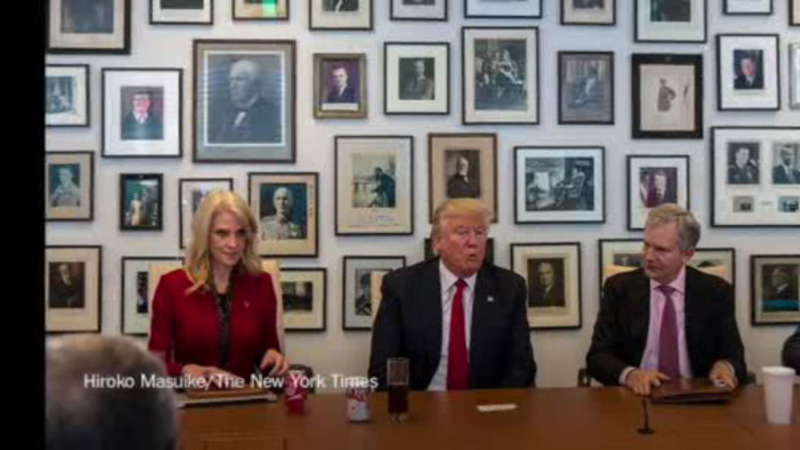 Trump discussed top adviser Kellyanne Conway's statement that he had no interest in pursuing further investigations against Hillary Clinton, declaring, "I don't want to hurt the Clintons; I really don't."

He also said he saw no potential conflicts of interest between his new job and his worldwide businesses, and he disavowed praise and support from extremist "alt-right" groups.

Trump's comments were tweeted out by Times reporters, who asked about a Friday night event for an "alt-right" group in Washington during which attendees celebrated Trump's election and gave Nazi salutes.

"I disavow and condemn them," Trump said.

Trump gets asked again about the alt-right conference. 'Boy you are really into" this issue, Trump replies. Then disavows again.

He said he saw no problems in working out any potential conflicts of interest between his companies and his White House post.

"In theory, I could run my business perfectly and then run the country perfectly," he said. "There's never been a case like this.

Trump on his businesses/conflict q's: "The law's totally on my side, the president can't have a conflict of interest."

He also said he was "phasing that out now" and passing business operations on to his grown children.

Trump had initially canceled the meeting early Tuesday, accusing the organization of changing the conditions for the session at the last moment.

I cancelled today's meeting with the failing @nytimes when the terms and conditions of the meeting were changed at the last moment. Not nice

He said in another tweet: "Perhaps a new meeting will be set up with the nytimes. In the meantime they continue to cover me inaccurately and with a nasty tone!"

"We were unaware that the meeting was canceled until we saw the President Elect's tweet this morning. We did not change the ground rules at all and made no attempt to. They tried to yesterday - asking for only a private meeting and no on-the-record segment, which we refused to agree to. In the end, we concluded with them that we would go back to the original plan of a small off-the-record session and a larger on-the-record session with reporters and columnists."

Around 10 a.m., Trump spokeswoman Hope Hicks confirmed that the meeting would happen. Trump himself tweeted that he was looking forward to it.

The meeting with the @nytimes is back on at 12:30 today. Look forward to it!

Also Tuesday morning, Trump heralded more "great meetings" in his Manhattan tower as he continued shaping his administration before heading to Florida for Thanksgiving.

Great meetings will take place today at Trump Tower concerning the formation of the people who will run our government for the next 8 years.