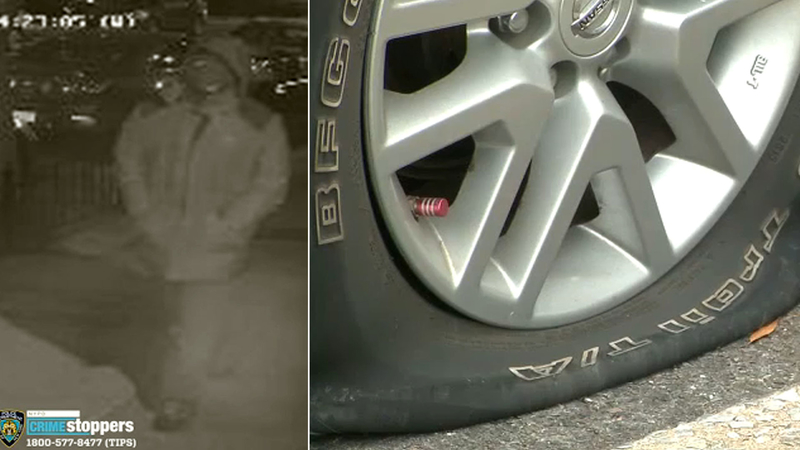 BAY RIDGE, Brooklyn (WABC) -- Police have released a picture of the suspect accused of slashing the tires of dozens of cars in a Brooklyn neighborhood.

It appears the suspect was covering his face at the time.

Most of the incidents happened overnight Saturday into Sunday along Shore Road in Bay Ridge.

Police say as many as 32 cars were vandalized.

Some were also keyed and scratched.

Then on Wednesday, residents woke up to five additional incidents in the 80s near Ridge Boulevard.

"This is out of control and unacceptable," City Councilman Justin Brannan posted on Facebook. "I have been in constant contact with the NYPD about this since Sunday morning and we have called an emergency meeting for later today. PLEASE share this photo and help us catch this guy. I've put up $5,000 of my own money towards ANY info that leads to an arrest."

Neighbors said they are increasingly on edge after the recent rash of vandalism incidents.

"I think it's a stupid thing to do," victim Azat said. "I don't see what the points of this."

Neither do police, but they are patrolling more frequently.

"He's already reacting to the patrols, getting more brazen and reckless," Brannan said. "The guy is out there. He knows what he's doing."

Police say he strikes in the wee hours of the morning when no one's around and is strategic. But officials are not giving up and are holding a private meeting Wednesday to formulate a plan.

"What is our prevention plan? Brannan said. "What is our apprehension plan? How are we going to catch this guy so he doesn't do it again?"