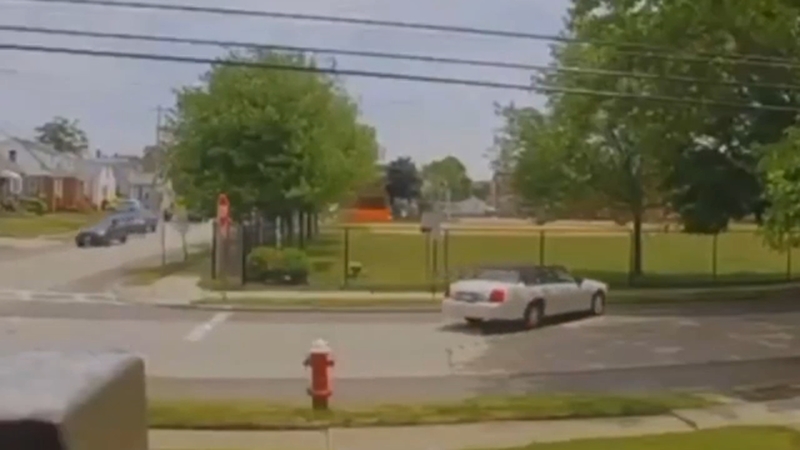 Police say 73-year-old Edward Coghlan first struck another car in the parking lot of a Wendy's on Ocean Avenue in East Rockaway just after noon.

When Coghlan drove off, the other driver began following him.

Coghlan then crashed his 2004 Lincoln sedan through a metal chain link fence at the Rhame Avenue Elementary School, drove across the field, and fled.

The driver was arrested for DWI after crashing through the elementary school's fence on Long Island.

Some 80 students in the first and second grade and several employees were on the field at the time, and staff quickly rushed them back inside the school.

"Oh my God, what could have happened," witness Denise Carney said. "It made me sick to my stomach."

"He said they usually play kickball right there, and by the grace of God, thank God, they weren't there," parent Jeanne Marie Margolis said.

Responding Fourth Precinct officers were able to locate Coughlan as he was driving on West Boulevard and placed him into custody without further incident.

Coghlan is charged with DWI, two counts of criminal mischief, reckless endangerment, and endangering the welfare of a child.

"He was just afraid to go back," parent David Gallagher said. "He wanted us to reassure him that there weren't going to be anymore cars that were driving through the school yard."

Coghlan, who lives only a couple of blocks away and reportedly has a history of drunk driving, reportedly had a blood alcohol level twice the legal limit.

He has since been released pending a future court date.

"We're just very scared that this happened and somebody who lives blocks away could be released," parent Karen Rackett said. "He's a danger to this community."

At approximately 12:42 today at the Rhame Avenue School, a car driven by an unknown individual crashed through the fence onto the school field on Rhame Avenue. Due to the immediate actions of the school staff who were supervising the playground, students were immediately directed off the field and brought into the building. No students were near the car and no students were injured or in danger. The individual drove across the field apparently searching for an exit and finally exited the field. The police have apprehended and arrested the driver and he will be charged.

I repeat that all children are safe and no children were harmed. I commend and thank the swift actions of the Rhame Ave. staff who were present and took action to protect our students. We are grateful for their actions.

Any students who were outside and may have viewed this incident will be counseled and supported by our school staff and faculty. Thank you to the Fourth Precinct for their swift action in apprehending the individual.

The moment an alleged drunk driver barrels through a school fence and drives all over a school yard in East Rockaway. School officials rounded up 70-80 young students in 1st and 2nd grade, to keep them safe. The driver, Edward Coghlan’s blood alcohol level, twice the legal limit. pic.twitter.com/yYkHEV9KcO