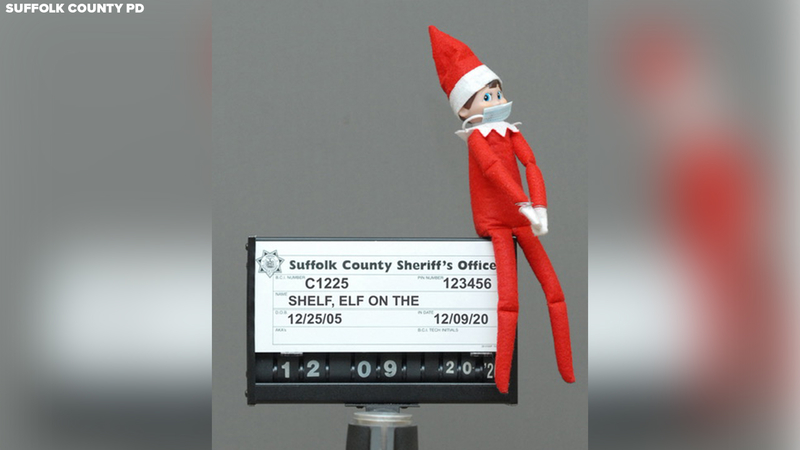 Elf on the Shelf lands in prison for mischief and mayhem

RIVERHEAD, New York (WABC) -- The Suffolk County Sheriff's Office says they've had it with a suspect behind a series of cases of mischief and mayhem.

In fact, there's a good chance you already know the culprit. It's the Elf on the Shelf!

He's also being accused of distracting the sheriff from his duties and nearly 440 counts of silly mischief in the third degree.

Cops say it was a tricky arrest because everyone knows you can't touch the elf, so deputies asked him to put the handcuffs on himself.

As Christmas approaches, demand for Santa is at an all time high, but there's a shortage of St. Nick impersonators this season. Lauren Glassberg has more.

"He then was transported to the jail in the glove compartment so he couldn't slip out the window," Suffolk County Sheriff Errol Toulon said.

Authorities say the elf is now under COVID-19 quarantine for 14 days and has been issued two tiny face masks.

They say it has not been determined whether or not this elf found in Sheriff Toulon's office is the same elf accused of the mischief occurring in households throughout the county.

When questioned by investigators, police say the elf just stared back and refused to speak or move.

In an exclusive interview with Sade Baderinwa, Dr. Jill Biden offers a beacon of hope to Americans during the holidays as the country struggles amid the pandemic.

The elf's attorney Mr. Rudolph R. Reindeer released a statement on his behalf:

"This poor elf has been framed. He was just trying to help children follow the rules and be good boys and girls before Christmas. He is employed at the North Pole and reports back to his employer, Mr. Chris Kringle, about whether or not the children have been behaving. Why would he misbehave himself?"

A court date has yet to be determined.