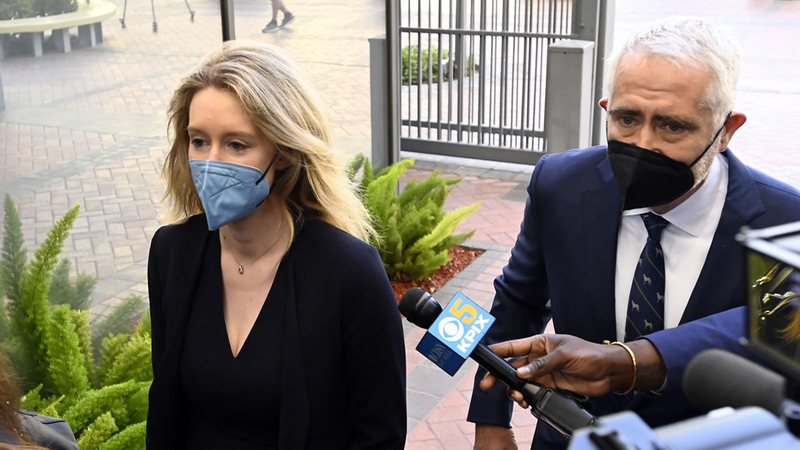 A masked Holmes filed past news photographers and reporters as she walked into the First Street courthouse just after 8 a.m. Tuesday, accompanied by her attorneys.

RELATED: Theranos fraud trial - Elizabeth Holmes may accuse former COO of abuse, court documents reveal
She ignored questions from reporters as she has in the past.

Holmes is facing fraud charges that could result in up to 20 years in prison and a $3 million fine.

Theranos created a blood test that required only a tiny sample from the finger and claimed to be able to diagnose a wide range of conditions.

Elizabeth Holmes has arrived for the start of jury selection in San Jose. If convicted, the Theranos founder could face 20 years in prison. pic.twitter.com/QBjaVsAEyS

Judge Edward Davila began the day discussing the process of voir dire, in which prosecutors and defense attorneys will vet the pool of prospective jurors from across Santa Clara County. They are referenced by number, not by name, to protect their identity.

The jury pool already has filled out a questionnaire that asked questions about their occupation, how they consume media, whether they have seen coverage of the Theranos case and whether they can be impartial. They also asked if they know of any of the possible witnesses who might be testifying during the course of the trial.
The jurors face a long trial that the judge has estimated could run for four months. About 40 prospective jurors will be questioned Tuesday with the process to be continued Wednesday.

Hearings will be held only three days per week with the trial scheduled to begin on Sept. 8.

ABC7 News reporters Amy Hollyfield and David Louie are at the courthouse and will have updates.

Seating a jury in the Elizabeth Holmes trial is not going to be easy. 10 possible jurors were dismissed because they have not received the Covid vaccine. One man said he’s not sure he can be unbiased because he watched a documentary about the Theranos founder. pic.twitter.com/TP2EOz9249

Jury selection underway in #theranos trial in federal court in San Jose. Ex-CEO Elizabeth Holmes is seated with her legal team as judge questions prospective jurors about potential bias. 12 jurors to be selected plus 5 alternates in trial expected to last 13+ weeks. #abc7now pic.twitter.com/BDRilxy1DT