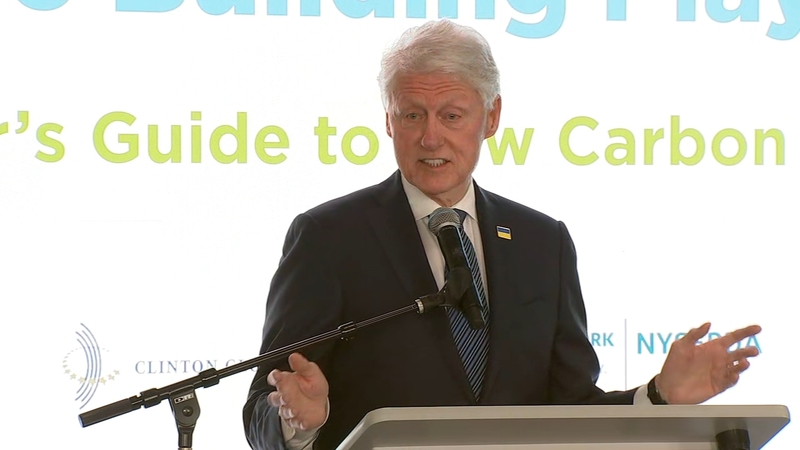 The report, entitled "The Empire Building Playbook: An Owner's Guide to Low Carbon Retrofits" is now available to builders.

"Through public-private partnerships like the Empire Building Challenge, we are reducing New York's reliance on fossil fuels by introducing low-carbon solutions that will advance our state's nation-leading climate agenda," Hochul said. "The Empire Building Playbook will be a critical tool to combat climate change and reduce harmful emissions across our state, all while moving forward with the green economy, creating clean energy job opportunities, and making the most iconic buildings in the New York skyline more sustainable."

Rayansh Boddu, a 9-year-old boy from Edison, New Jersey, is saving the planet, one battery at a time.

Hochul says if all buildings in the city follow the playbook, it will have an economic impact of $20 billion and will create 100,000 jobs. It will also help the city hit its goal of reducing its carbon footprint by 80% by 2030.

"If you believe New York should have more jobs, if you believe that we should avoid the worst consequences of climate change, if you don't want to see the rising waters flood the south end of Manhattan, do this," Clinton said. "Give people the dignity of work, create new businesses, and clean the air. We know, now, we don't have any excuse. Our grandchildren are depending on it."

The Playbook, launched Wednesday at the Empire State Building, is available as an online resource containing the results of the four partners' in-depth analysis of one building in each of their portfolios to identify replicable pathways to retrofit high rise buildings to low carbon levels of performance and achieve commercially acceptable returns on investment.

This work includes case studies, guidance, and project-specific technical information on best practices for building owners to achieve deep energy and carbon reductions at their properties and comply with local laws such as New York City's Local Law 97, as well as respond to tenant and investor demands.

Co-developed with NYSERDA and other NYC-based landlords, and building on work supported by the Clinton Global Initiative, the innovative guide outlines the step-by-step process for existing commercial buildings to develop a pathway to carbon neutrality.

Significant findings from the Playbook include:
--Focusing on how to reduce, recycle and store heat is a primary way to drive down buildings' greenhouse gas emissions and achieve a strong return on investment.
--A resource efficient approach to electrification for big buildings phases out fossil fuels while reducing peak power consumption, providing relief to the electric grid now and in the future.
--Small steps create a large impact with incremental investments achieving significant carbon reduction over time.
--Traditional energy audits are not enough and decarbonization requires a rigorous systems analysis of whole-building heating and cooling, ventilation, domestic hot water and envelope. Building owners, engineers, and solution providers must collaborate to choose solutions that are both technically and financially viable.
--Tenants are key. Building owners will accelerate investments in climate-friendly office spaces if tenants demonstrate demand.

"We know that climate catastrophe isn't some far-off threat," Adams said. "We must end the era of fossil fuel, but in order to reach this goal, we must work with our largest emitters of carbon: Our buildings. By retrofitting and decarbonizing our buildings, we can invest in our planet's health and our people's health, improving air quality and creating good-paying jobs for New Yorkers. I want to thank Governor Hochul and the Empire State Realty Trust for taking the bold step of putting this playbook together, and I look forward to working together to implement it across the city."

As Earth Day approaches, officials in Montclair are voting on an ordinance that would only allow native plants to be planted on town property. Crystal Cranmore has the story.