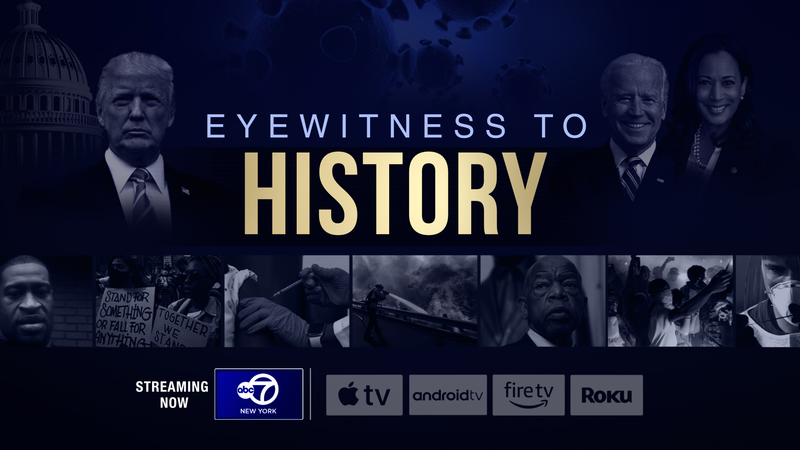 NEW YORK (WABC) -- When the clock struck midnight on January 1st and the year 2020 was ushered in -- this was a different New York, a different America.

Not just because people were packed together like sardines and the only masks anyone wore were to keep warm.

Fast forward just a few weeks... Times Square went from the biggest party on the planet to a pandemic-stricken ghost town.

The year started with the Senate hearings on the Impeachment of President Trump. Yes, that was this year.

On January 22, President Trump asked about coronavirus said, "We have it totally under control. It's one person coming in from China, and we have it under control."

By March, Joe Biden would emerge as the Democratic front-runner and coronavirus COVID-19 would emerge as a crisis, shutting down cities, businesses, and schools across the country.

2002 struck again in May when the killing of George Floyd at the hands of police ignited protests across the country.

Racial tension and the COVID crisis would grip the country for most of the summer while a record-shattering 30 hurricanes, a dozen making landfall, would cause devastation across North America.

The presidential debates opened in October with lots of shouting, and then President Trump got COVID-19 a couple of days later. Days after America voted, Joe Biden was declared the President-elect, but President Trump and his campaign challenged the results in the court of law and public opinion with allegations of voter fraud but without evidence to prove their claim.

December arrived with a hopeful note - a much-needed shot in the arm with the approval of the first COVID-19 vaccines. Yet, experts warned dark days would lie ahead as the virus continues to spread.

Time Magazine bluntly wrote, "the worst year ever". But this 'year to forget' will be remembered forever... We lived through history.

The confluence of a life-altering virus unseen since 1918, racial unrest and social injustice that brought back memories of the 1960s, and a president and presidential election unlike any other in modern times.

So many people want to look forward to 2021 -- but let's not forget -- this year also brought out the best in people. Scientists working around the clock to come up with a coronavirus vaccine, nurses, and first responders risking their lives to save others. Neighbors gathering every night at 7 p.m. to clap and make noise outside their windows.

In the eyes of historians, 2020 will likely be defined by the coronavirus crisis -- but the year had so many other world-changing events as well -- including ones that happened before "flattening the curve", "positivity rates", and "second wave" became terms that we speak of every day.

Look back at 2020 with Bill Ritter on 'Eyewitness to History' is now streaming above and on ABC7's streaming apps on Roku, Amazon Fire TV, Apple TV, and Android TV. To stream, search "ABC7 New York" in the app store.