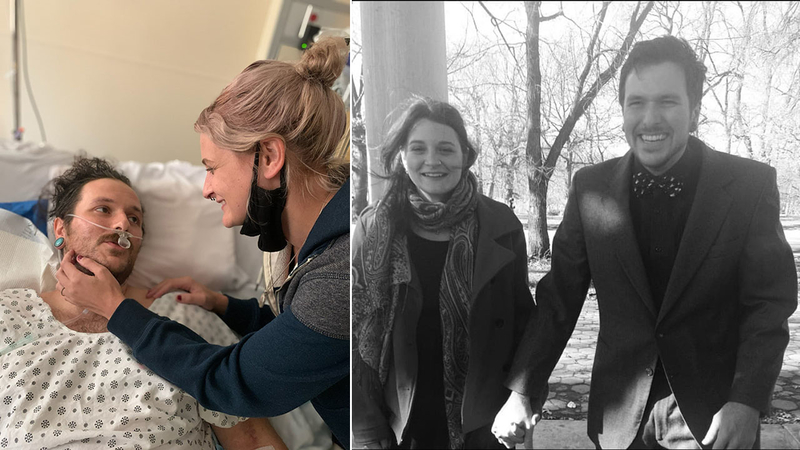 FLATBUSH, Brooklyn (WABC) -- An innocent bystander who was shot and possibly paralyzed when gunfire rang out in broad daylight on a Brooklyn street is speaking out about the harrowing ordeal.

From his hospital bed, 33-year-old Sam Metcalf said that one minute he was on his lunch break, walking with his wife, and the next he was on the ground, shot in the back.

With a bullet lodged in his spine, he may never walk again. But he is thankful to have his life.

They were walking at the corner of Ocean and Woodruff avenues in Flatbush last Wednesday afternoon when a man pulled up in a BMW and started shooting.

The Intended target was an 18-year-old who returned fire but was killed by a bullet to the chest.

"My whole community has been good to me," Metcalf said. "People shouldn't have to feel like they have to run around with a gun in order to make a living."

The recent spike in shootings across the city has left residents fearful, with 73 more deaths and nearly 450 more shootings in 2020 compared to this point in 2019.

Over the weekend, a mother of three at a baby shower was killed in the Bronx -- one of five people killed in separate incidents.

Community activists blame bail reform laws they say that have failed hard working people, returning violent offenders to the streets while being lenient on those caught carrying weapons.

"How many individuals are out here right now committing these crimes getting turned back out on to the streets," activist Tony Herbert said. "It's not enough to say we have the toughest gun laws in the country when those with the guns are not getting the memo."

Meanwhile, Metcalf says his wife Sabrina has kept him strong, and his family has started a GoFundMe page for his expenses as he hopes for a miracle.

"Honestly she's been incredible, every moment holding my hand when I was in pain," he said. "I appreciate her so much."

Community advocates are asking for a year minimum sentence for those caught illegally carrying weapons.

No arrests have been made in the case, and police are said to be looking for a silver BMW SUV.