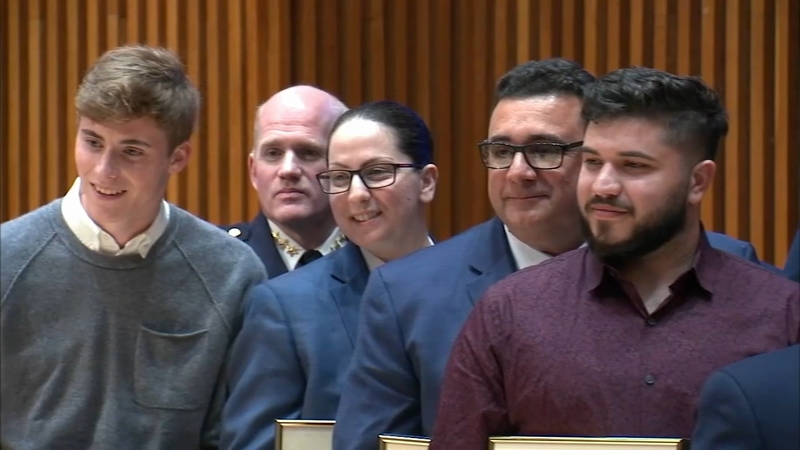 Four of the five people who are splitting the $50,000 Crime Stoppers reward were present, including Zack Tahhan, who went viral after an interview discussing how he flagged officers of the suspect's whereabouts.

Two of his friends, as well as 17-year-old Jack Griffen, who spotted the suspect in Chinatown, were also in attendance.

Griffin says he was on a school field trip to a photography museum, taking photos.

The fifth civilian hero who saw something and said something has not been publicly identified.

"Each of these individuals exemplify determination and courage," Police Commissioner Keechant Sewell said. "Working together, we got a violent offender off the streets."

Sewell said James had "no option" but to call police to disclose his East Village location because detectives were closing in and had blasted his picture around the city.

"He was smart to turn himself in, not because he was altruistic, but because of the job we did," Mayor Eric Adams said.

"The public is who we serve, but they are also often our best partner," Sewell said. "We appreciate all of those who responded to our call for information to locate this suspect, including all of those whose tips did not pan out. We urged the public to join us in this effort to find this suspect and New Yorkers stepped up."

Crime Stoppers normally promises anonymity, but the other four had already identified themselves to the media.

After Tuesday morning's attack on the subway in Sunset Park, the NYPD issued a plea for help in locating James.

Detectives then traced the many tips that streamed in and constructed a timeline of events leading to James's apprehension on Wednesday afternoon in Lower Manhattan.

"Thanks to the help of these five good Samaritans, the NYPD was able to do its job and get a dangerous suspect off the streets just hours after his picture was released," Adams said last week. "The bravery of these five individuals are what truly make New York City the greatest city in the world. Thank you to the MTA, the Transport Workers Union Local 100, and the New York City Police Foundation for providing this $50,000 reward."

Federal officials have charged James, 62, with carrying out an attack on a mass transit system. He was been ordered held without bail.

Ten people were shot, while 19 others were injured. Amazingly, none of the injuries was life-threatening.