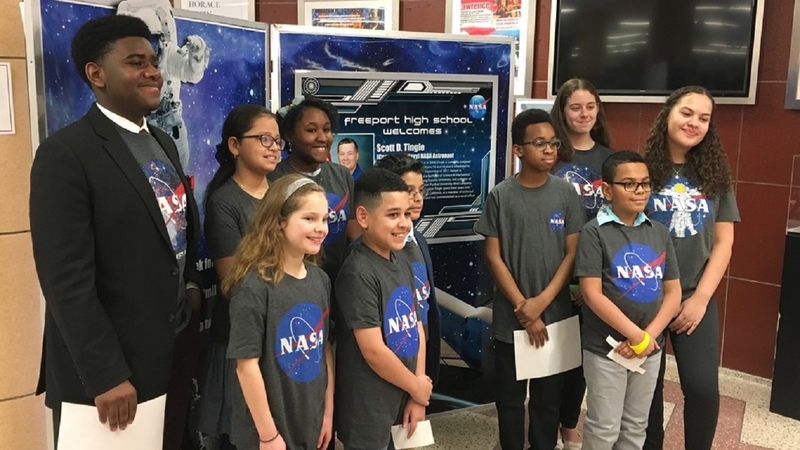 FREEPORT, Long Island (WABC) -- If you shoot for the stars, you just might find answers. Even if it's 254 miles above the Earth.

On Tuesday, Freeport School District, in a prestigious group of only 13 across the nation, got 10 minutes of radio contact with NASA Astronaut Scott Tingle, aboard the international Space Station. How'd they communicate? NO satellites or cell phones, instead - HAM radio.

"We are creating a phone linked to an amateur radio station in Italy. They have a large antenna, which is pointing and tracking the international space station," said Craig Ross, of the Long Island Mobile Amateur Radio Club, which assisted in the hook up.

The kids, meanwhile, had no shortage of important questions.

Questions like - "Do antibiotics work in space as they do on Earth??"

And, "What does it look like when seasons change above the Earth??"

Tingle took the time to answer all of them, despite his "'fast paced' day.

"The space vehicle is going 17 thousand miles per hour..and so is the space station," he explained.

Aside from the award-winning essays in the district, there have also been impressive research projects, which caught the eye of NASA.

For 4th grade essay winner Ava Smith, it was a thrill just to ask questions. Hers was about how age affects you in outer space.

"All these worlds out there that aren't ever discovered yet. Just really curious to know what's there. And I'm one of those people - really curious," she said. She was beaming the whole afternoon.