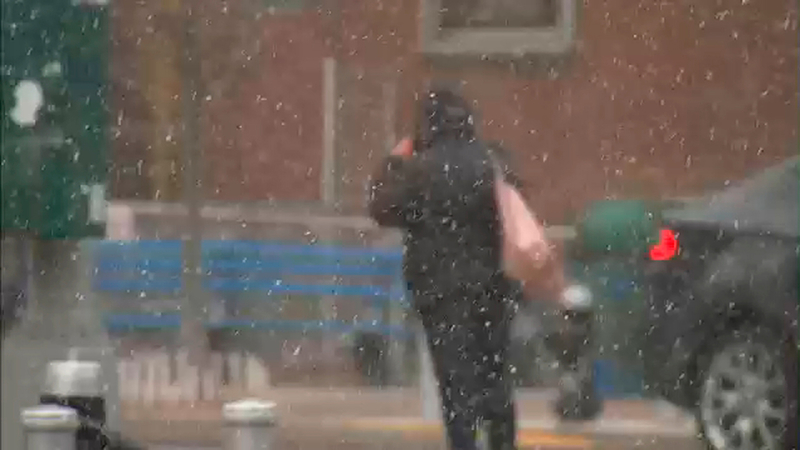 NEW YORK (WABC) -- Icy conditions are gripping the New York area as a deep freeze descends on the Tri-State and brings some of the coldest temperatures seen in years. And Thursday is expected to be even colder.

Some areas that have already been hit with snow are bracing for more, this as a wild snow squall ripped through most of the regions Wednesday afternoon.

Jim Dolan reports on how people are coping with the extreme cold.

Snow piled up quickly and briefly as the wind-whipped squall -- an intense burst of moderate to heavy blowing snow -- lasted around 20 to 30 minutes before exiting as quickly and abruptly as it arrived.

The biggest concern heading into Thursday is that plunging temperatures would turn streets and sidewalks into the equivalent of ice skating rinks.

Salt spreaders were out on the main roads, but temperatures below freezing and untreated side roads are expected to create some dangerous conditions.

Dozens of schools had delayed openings or early dismissals, with most after-school activities canceled or postponed.

Drivers were urged to plan for hazardous travel, and residents are advised to take mass transit where possible.

More than 20 vehicles, including a New York State Police vehicle, were involved in a crash on the New York State Thruway in Genesee County during the #snowsquall https://t.co/cVU1KS8hkV pic.twitter.com/h6EuftIzgl

Gov. Andrew Cuomo urged people to stay off roads if possible, particularly in areas to the north and west that are expected to be hit much harder.

Cuomo said there was already 11 inches of snow on the ground by late morning in upstate areas, with up to 2 feet expected by the time the storm ends.

"Stay off the roads," he said while joining state and local officials for a news conference at a state Department of Transportation facility in the Buffalo suburb of Cheektowaga. "Let the plows to their work."

High winds and plunging temperatures will create dangerous conditions that "should not be taken lightly," he said.

Travel bans for tractor-trailers and buses remained in effect for several western New York highways. Still, plows were at the ready in more southern areas of the state.

Much of northwest New Jersey saw a few inches of snow, but the main concern Wednesday into Thursday is the dangerous cold and high winds.

Officials are warning the deep freeze -- with wind chills below zero -- will make even going outside dangerous.

Roads will be icy in areas, and winds could bring down trees and power lines leading to outages.

"The winds are going to pick up, and I just ask everyone, if you do lose power, call it in immediately," Board of Public Utilities president Joseph Fiordaliso said. "With those frigid temps, we don't want anybody in a cold house like that. We are talking dangerous situations.

Salt spreaders are out to combat the ice, but commuters are urged to leave extra time.