Dylan Harrison leaves behind his wife and 6-month-old baby.
ABCNews
By WILL MCDUFFIE 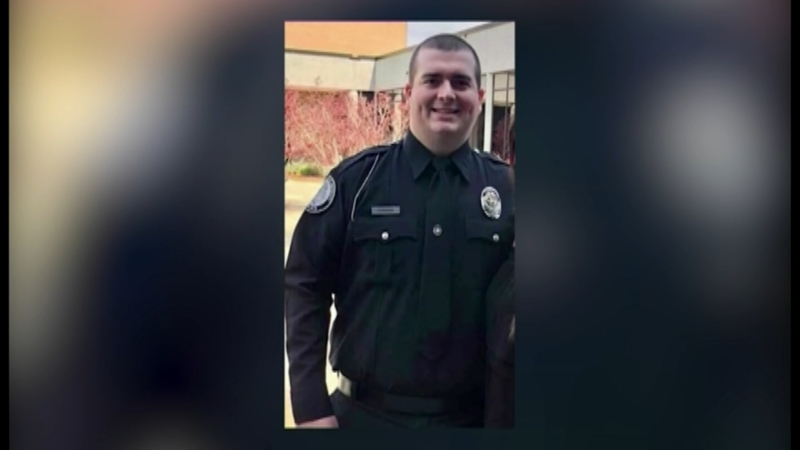 ALAMO, Georgia -- Investigators announced Sunday afternoon they had arrested the suspect wanted in connection with the killing of a central Georgia police officer who was shot outside his police department early Saturday, authorities said.

Dylan Harrison, 26, of Dudley, Georgia, was working his first shift as a part-time officer with the Alamo Police Department in Wheeler County when he was fatally shot around 1 a.m. Saturday, police said. Harrison was allegedly killed over an earlier confrontation that took place near the precinct a few hours prior, investigators said.

Damien Anthony Ferguson, 43, of Alamo, Georgia, was taken into custody Sunday afternoon following a nearly 38-hour manhunt, authorities said. He was arrested without incident while officers executed a search warrant of his residence, the Georgia Bureau of Investigation said during a news conference Sunday evening.

Lindsay Wilkes, the special agent in charge for the GBI, told reporters that Harrison was involved in an altercation at a parking lot on Circle K across the street from the precinct Friday night. Harrison allegedly saw a man who was an associate of Ferguson commit a traffic violation and made contact with him, according to Wilkes.

The officer allegedly used his Taser on the suspect when he did not comply with Harrison's orders, Wilkes said.

"It is believed that the ambush-style attack on Officer Harrison was retaliation for the incident and the arrest of the man Friday night," Wilkes said.

Ferguson was charged with murder and with aggravated stalking related to a previous domestic incident, according to the GBI. Attorney information wasn't immediately available.

Ferguson served eight years in prison after being convicted in Wheeler County of charges including aggravated assault of a peace officer, Georgia Department of Corrections records show. He was released in 2006.

Before his arrest, the Georgia Bureau of Investigation issued a "blue alert," which indicates the search for a suspect who's allegedly killed or injured an officer and hasn't been apprehended, for Ferguson. An $18,500 reward was offered for information related to Ferguson's arrest.

Harrison appears to be at least the fifth Georgia officer killed in the line of duty this year, according to Officer Down Memorial Page, which tracks law enforcement deaths.