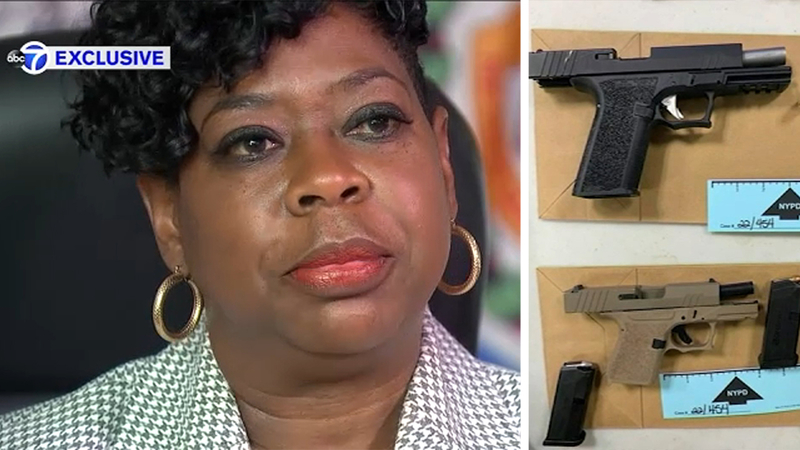 Bronx District Attorney Darcel Clark shared a letter she sent this week to both Mastercard and Visa, urging them to cut ties with ghost gun manufacturers.

"We're asking Mastercard and Visa to get involved, asking them, 'don't let your cards be used for that,' because what is happening with those gun parts and pieces, putting them together, people are dying."

"I'm going to do whatever I can to make sure that people know who she was and why I'm doing this for her," Henriquez said.

WATCH EXCLUSIVE INTERVIEW | 'She was my princess': Mother speaks out after losing daughter to ghost gun
EMBED More News Videos

Yanely Hernandez wants the gunfire to stop. She lost her 16-year-old daughter to a bullet that came from a ghost gun. She talked exclusively to NJ Burkett on what needs to be done to prevent more victims.

She was struck with a stray bullet on her way home from school last month. It was shot from half a block-away.

The bullet that came from a so-called 'ghost gun,' a firearm ordered online that arrives in pieces and is easily assembled into a lethal weapon.

"We talk about the iron pipeline and people go into different states where they can buy guns easily or whatever," Bronx District Attorney Darcel Clark said. "But here, you get it right in your house. No serial numbers, untraceable, no background check nothing. That is a problem. And that is dangerous."

Bronx District Attorney Darcel Clark sat down with NJ Burkett to discuss the growing ghost gun epidemic in New York City and how she plans to get them off the streets.

The Biden Administration has already ordered ghost gun companies to require background checks and to stamp their parts with serial numbers, but it doesn't take effect until August.

"So, between now and then how many people have to die," Clark said.

"It's smart and creative," said gun control advocate Nick Suplina. "It fills the time gap and gets us to the right answer faster."

"You have to do whatever you have to do," she said. "So, we can stop all these crimes happening, you know? Not only my child, future kids, you know?"

"With respect to this topic, we would note that we believe that it is the responsibility of elected officials to enact meaningful policies to address the issue of gun violence, while it remains Mastercard's role to ensure that consumers are permitted to make lawful purchases on our network. Where laws prohibit the sale of unserialized firearms parts, we are working to ensure Mastercard products cannot be used to purchase them. We will continue to engage with lawmakers, law enforcement and others on important topics such as this."

Last year, police recovered just nine ghost guns in the Bronx. So far this year, 32 have been recovered.

Prosecutors know that's just the tip of an iceberg that is growing.