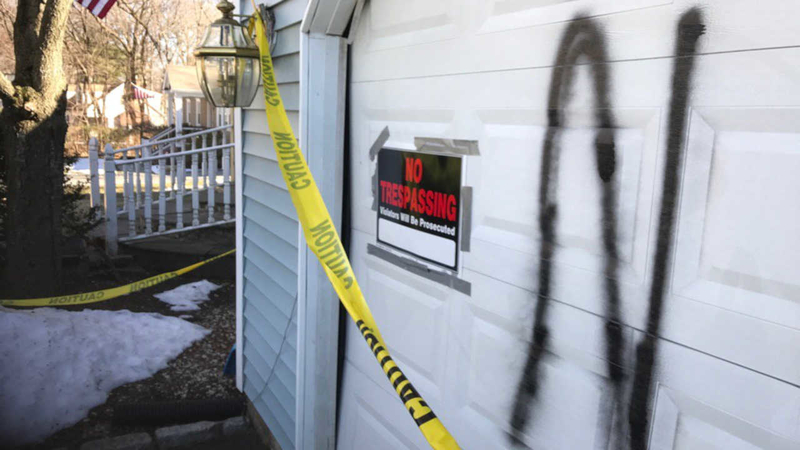 STAMFORD, Connecticut (WABC) -- An interracial couple is speaking out after finding disturbing racist graffiti on their home in Stamford.

Fifty-nine-year-old Heather Lindsay said the graffiti was spray painted on her garage door -- the N word in big, bold letters. She said the graffiti has been there since her black husband, Lexene Charles, noticed it on the Saturday before Martin Luther King Day.

"I'd like to find out who did it, because this has to stop," Charles said.

To make sure that happens, the couple decided not to remove the graffiti, and now, the City of Stamford has cited them with a $100 Notice of Blight Violation. One civil rights leader says it is shocking. Darnell Crosland, from the Connecticut NAACP, believes if the graffiti is covered up, the whole matter will be swept away.

"We think the police should open up a live investigation, and means they should interview people," Crosland said. "They should create a police report, and they should have a case number. I don't even know if this situation has a case number yet, and I think that is an affront to all of us."

City leaders said Stamford police are looking into what happened.

"Officers spoke with the homeowner and neighbors immediately, but could not find a witness who saw or heard anyone spray painting the sheet-metal garage door," the director of public safety said in a statement. "There were few security cameras in the neighborhood, and none captured the incident."

Still, many area residents think more needs to be done.