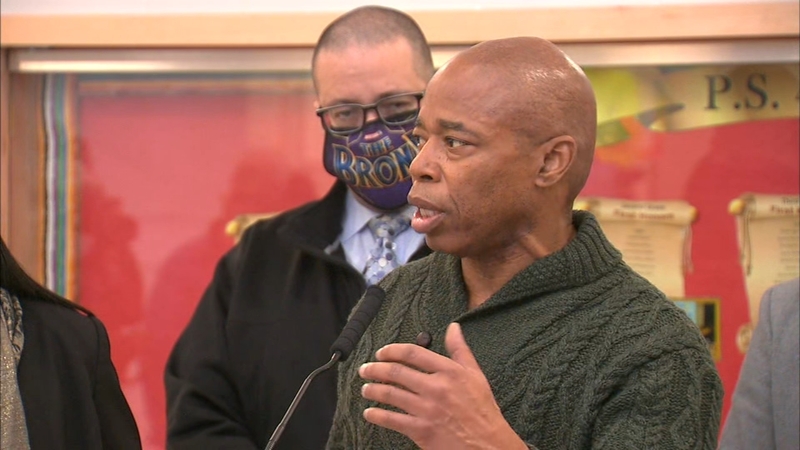 NEW YORK CITY (WABC) -- After an onslaught of gun violence across all five boroughs Mayor Eric Adams is gearing up to get all city agencies involved in a new "blue print for safety."

Adams and other government officials met with representatives from several crisis management organizations and in the Bronx on Saturday to address the so far failed approach to curb gun violence.

After only three weeks in office Adams's administration has seen dozens of shootings, most recently an 11-month old child struck by a stray bullet and an officer slain during a domestic violence call.

Crisis management groups like Save Our Streets say they're doing as much as they can to prevent violence in communities, but bureaucratic red tape gets in the way.

"Resources can't get through to support groups for hiring staff, allocating resources because of red tape," said Hailey Nolasco, of Save Our Streets.

Many representatives from outreach groups echoed Velasco's call for a more streamlined approach not just with funding, but when it comes to communicating with city agencies about enforcement and community involvement.

One leader from BRAG, Bronx Rises Against Guns, said that local law enforcement needs to be better trained for how to approach gang members and at-risk teens.

He said during a three-day training at a precinct in the Bronx when scenarios were put in front of officers, "they didn't know what to do."

"We welcome any training methods that you've identified," Adams said. Admitting that the "sterilized method" that's implemented in today's police training is dated and hasn't adapted "as the streets have changed."

Another leader from an anti-violence group pointed out that DSNY needed to play its part in cleaning the streets, literally.

She said many times weapons and drugs are hidden among piles of uncollected trash and if that was addressed the exchange for supplies would become more difficult.

"If my DSNY is not listening to the crisis management team on the ground then they are actually in the way of what they're doing on the ground," said Adams.

After more than an hour of discussion and exchanging of ideas, Adams proposed a new approach for the CMS organizations when dealing with city agencies.

Adams also said leaders from CMS organizations will meet with the commissioners of city agencies to formulate a citywide approach to fighting gun violence.

The mayor also addressed the flow of guns into the city, like the pistol used in the killing of the officer in Harlem.

"We're removing thousands of guns off the street, but there's an endless flow that continues to come through our city boarders," said Adams. " I am encouraged by the president's acknowledgement that we need to collaborate with city, state, and federal entities the way we did during 9-11 to fight terrorism we have to fight the crimes on our street."

Government officials that joined the mayor said the Build Back Better plan stalled in Congress would help fund CMS programs, as well as other agencies in need of money that could help curb violence by improving the overall environment that at risk youth are in.

"We are going to lay out the blueprint for safety and show how we got here," said Adams. "This will give everyone the marching orders that we're moving in the same direction. Because if the police are taking thousands of weapons off the street, and we're putting dangerous criminals on the streets or we're not addressing the flow of guns then we're wasting our time."