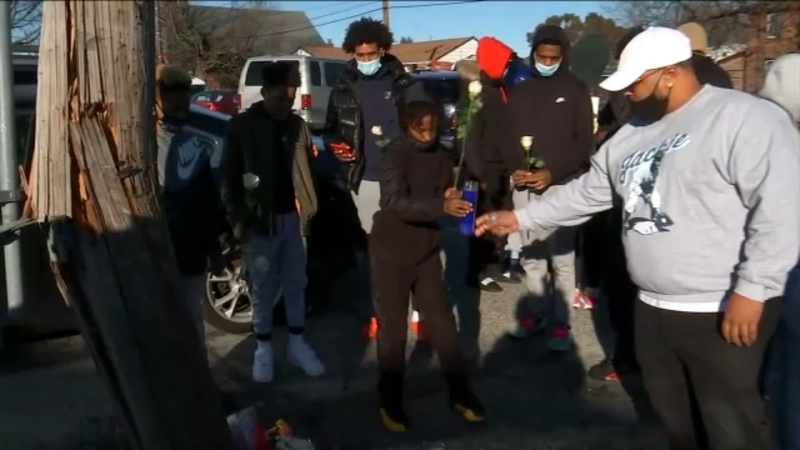 Fifteen-year-old Jomani "Jo-Jo" Wright, a sophomore at Uniondale High School with his sights set on the NBA, was with three other teens on their way to a gym for a private workout when they were T-boned by an SUV at the intersection of Maple Avenue and Front Street.

The collision caused the vehicle Wright was in to hit a pole. He was rushed to Nassau University Medical Center, where he was pronounced dead.

"I can't believe it ended this way," dad Joe Wright said. "His mind was really set on being a pro."

All other victims, including the 87-year-old driver of the SUV, were transported to area hospitals and treated for non-life-threatening injuries.

Joe Wright said his son showed talent in the game beginning at just 4 years old, and by the 8th grade, he was already playing on the varsity team at Uniondale High School.

"His mind was really set on being a pro," he said.

He said the private workouts were the only option after school practices were canceled because of COVID, and that basketball was not the only area where his son excelled. Jo-Jo Wright was also a straight A honor roll student.

"He made you laugh, great smile," he said. "He was inspiration to little kids. A lot of little kids looked up to him.

"Heartbroken," he said. "Loved the young man. One of the my favorite people I've met in my life...He had the kind of personality that made teammates want to follow him. He was so charismatic and such a good leader."

Wright, a point guard, was the top-rated player in Nassau County, and his death prompted an outpouring of love and support.

"Heartbroken by the tragic death of 15-year-old Jo-Jo Wright, one of Long Island's most promising basketball stars, in a car accident last night," Nassau County Executive Laura Curran said. "Our thoughts are his family and the whole Uniondale community."

Heartbroken by the tragic death of 15 year-old Jo-Jo Wright, one of Long Island’s most promising basketball stars, in a car accident last night. Our thoughts are his family and the whole Uniondale community. pic.twitter.com/5TSDrE3Dgg

The school district is offering grief counseling and support at the high school Thursday and in the coming days as a resource for all students, faculty and staff.

"The Uniondale Union Free School District is devastated by the tragic news of the sudden passing of Jomani Wright," school officials said in a statement. "The Board of Education and Central Administration offer our deepest condolences to Jo Jo's family and friends during this difficult time. Jomani was an incredibly talented, compassionate and intelligent scholar whose young life has already positively impacted so many people. He will be greatly missed by all."

Curran said Thursday that she will be filing legislation to rename a portion of Uniondale Avenue, Jomani "Jo-Jo" Wright Way.

"Jo-Jo was an inspiration to his teammates, friends, family, and community," she said. "We honor his life, one filled with endless potential, which was cut short way too soon."

People out enjoying Central Park Wednesday were graced with a once in a lifetime sight, a Snowy Owl.