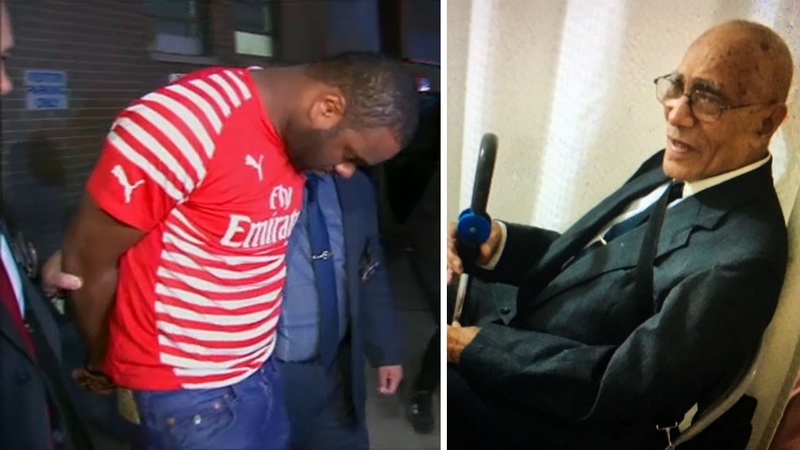 BEDFORD STUYVESANT, Brooklyn (WABC) -- Police have charged a man with murder in connection with a Brooklyn home invasion that left a 91-year-old man dead.

Dwayne Blackwood, 27, kept his head down and tried to ignore the questions as detectives led him out of the stationhouse Friday night.. He's facing charges of second degree murder and second degree assault.

He was walked by police Friday night as onlookers got emotional at the sight of him.


"You a coward! You a punk!" an onlooker yelled. "You lucky the police is here you a coward!"

It was something impossible to ignore, a stark reminder of a family's and a neighborhood's agony.

Police say Blackwood and another man are the thieves who pushed their way into a brownstone on nearby Decatur St. last week.

They say at 3 p.m., they tied up 91-year-old Waldiman Thompson and his 100-year-old wife Ethlin, before making off with several thousand dollars in a lockbox.

Ethlin survived, but the ordeal was too much for the love of her life who died before her eyes.

The centenarian blew kisses at loved ones after her husband's memorial service Friday, as pallbearers slid his casket into a waiting hearse.

The services were held at the Hanson Place Seventh Day Adventist Church in Fort Greene.

Detectives from the 81 squad have worked around the clock for a week on this case, questioning Blackwood for hours Friday.


But they're still hunting for his alleged accomplice, the man seen in a video.

And sources say they're looking for a woman who was involved as well.

Cops have a lot more work to do, but on the day they laid Waldiman Thompson to rest, family members said they were happy detectives had come this far.