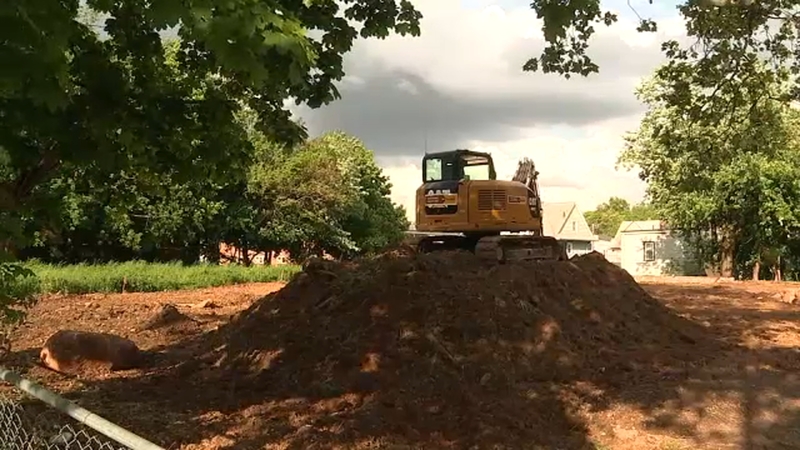 NEWARK, New Jersey (WABC) -- The City of Newark is making an effort to find creative housing solutions for its homeless population, but some residents aren't happy with the plan.

Berta Perry, 95, and her neighbors take pride in their gardens and look out for each other.

"They haven't put up any signs or anything for us to know what's going on," Perry said.

Residents along North Munn Avenue in Newark are furious after finding out the city wants to set up eight shipping containers on their residential block to house the homeless.

CORRECTION: A previous version of the story and the video in the player above incorrectly stated the city was planning to set up 25 shipping containers.

"I'm very angry," resident Donna Parker said. "How would you feel if something came to your neighborhood that you didn't want? We live here. We pay taxes here."

They say the public houses down the street are plagued by drugs, gangs, and violence, and to set up a homeless campus on the other side would bookend their community.

"We could put this project anywhere," community activist Mura Elamin. "We just want to be responsible where we put these types of communities."

In response to the fury, Newark mayor Ras Baraka met with residents Monday night, conceding the city did not communicate its plans, but refused to let the press observe the meeting.

Marguerite Royster said she was not given time to voice her concerns and left just as angry as she had arrived.

"We already got enough problems, I don't want this," Royster said.

Mayor Baraka said in a written statement the city's goal "is to end homelessness in Newark" and its committed to finding solutions.

Last year, the city set up similar containers in another area of the city, but that was not in a residential area. They called it Hope Village 1.

City officials say the larger goal is to have shipping containers in every area.

The containers slated to go on North Munn Avenue were supposed to be the second Hope Village. But Late Monday, city hall said this particular location is not a done deal.

"We want people to have somewhere to live, but we already have more than enough problems on this block," said resident Marguerite Royster.