Do you know how to draw Disney's iconic characters? 'Sketchbook' is here to help

If you can dream it, you can certainly draw it.
OTRC
By George Pennacchio 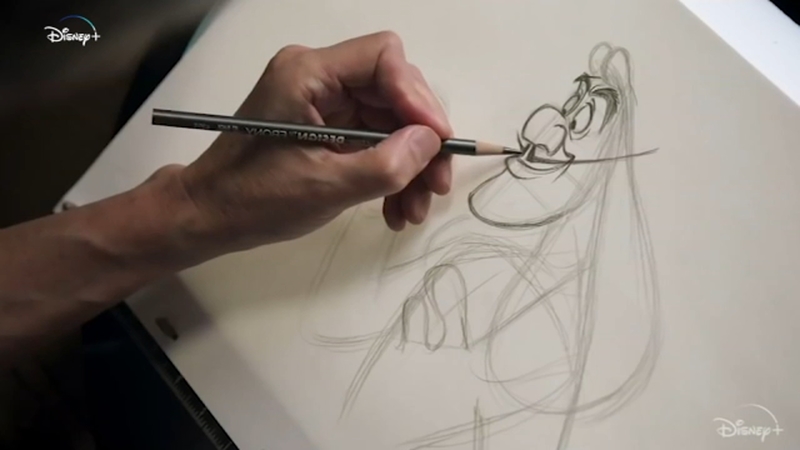 'Sketchbook' on Disney+ brings your favorite Disney characters to life

LOS ANGELES -- There's a new six-part documentary series aimed at teaching you how to draw some iconic characters from Disney animated movies.

This new instruction documentary will focus on the art of Simba, Captain Hook, Mirabel, Kuzco, Genie and Olaf in six separate episodes.

You get to see how they all came to life on screen along with meeting the people, your teachers, who are behind these iconic characters.

Today, embark on a 6-part drawing experience with artists from Walt Disney Animation Studios and stream all episodes of Sketchbook on #DisneyPlus. ✨✏️ #DisneySketchbook pic.twitter.com/9XC6JBmeS7

"We wanted it to be approachable and didn't want it to feel like there is this high cost of entry," said Jason Sterman, the series' director and executive producer. "The idea that you could hopefully find a pencil and a piece of paper anywhere and be surprised by your own capabilities."

The series also features the works of Eric Goldberg, who drew Genie in the 1992 film "Aladdin."

The beloved character was voiced by Robin Williams.

"Doing the Genie was actually my first Disney gig, you know? So I kind of landed on my feet there," said Goldberg. "When people ask questions, that just shows that level of interest that they have. They want to know, 'What was he like? Did he adlib most of his lines?' Yes!"
The exclusive experience will give viewers a new understanding of how these beloved characters come to life.

"When the show works at its best, it's not necessarily the main takeaway that you're learning how to draw," Sterman said. "One of the things that we really wanted to explore was the kind of lifting of the curtain, if you will."

If you can dream it, you can draw it. ✍️ Meet the six artists who will bring your favorite characters to life in the new series from @DisneyAnimation, #DisneySketchbook, now streaming on @disneyplus. pic.twitter.com/2rKFtZx2XR

"Drawing is our currency at the studio," said Goldberg. "We absolutely draw everything first. We deliver it differently if we're going to be delivering a CG film compared to a hand-drawn film. But, you know, it all starts with the drawings, and I don't think that's ever going to go away."

"Sketchbook" is streaming now on Disney+.