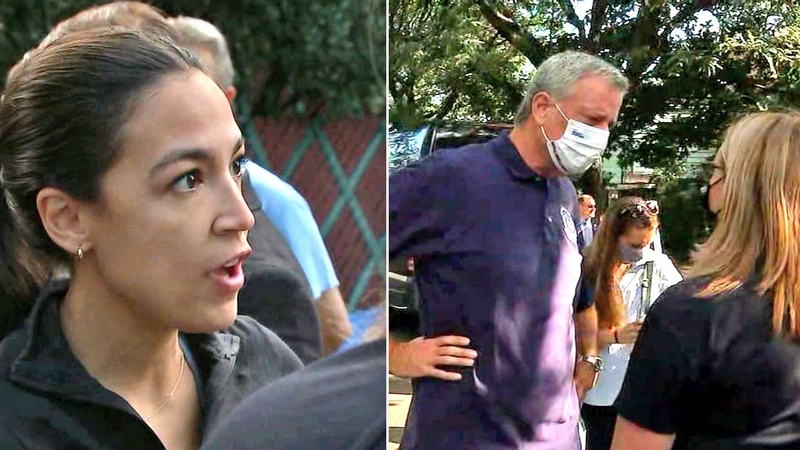 WOODSIDE, Queens (WABC) -- New York City Mayor Bill de Blasio led officials on a tour of Ida damage in Queens Monday, in an area that saw upwards of five feet of flooding as more than a dozen New Yorkers perished in the storm's wrath.

The mayor was joined in Woodside by FEMA Administrator Deanne Criswell, Sen. Chuck Schumer, and Rep. Alexandria Ocasio-Cortez, with Schumer announcing that homeowners are now entitled to up to $34,000 in federal grants that do not have to be repaid.

"These are the memories that families have," said Schumer. "This is what they sit in their living room and remember back about. Those things show the emotional impact as well as the financial devastating impact."

Still, even five days later, residents are trying to dry out and sort through what's left of their belongings.

Pile after pile of what was once their homes now sit on the curb, thrown out with the trash. Many of the families say they need help, and they need it now.

The video from one officer's body camera shows another officer first reaching into the opaque water and then dipping under the surface.

It took just 10 minutes for basements and cars to fill up with sewage and water, and while the flood waters may have receded quickly, getting rid of all that was destroyed -- belongings and memories -- is a lengthier process.

"We used to think flooding is a coastal thing, it's not anymore," de Blasio said. "It can happen all over this city. People have to be able to get affordable flood insurance for flooding that can happen anywhere. It's a new world now."
EMBED More News Videos

The Younas family is still cleaning and sorting almost a week later.

"We're just trying to clean up everything we can to get the next step in order," one family member said.

Most everything on the lower level of their home destroyed, but still, they fare better than many in basement apartments who lost their lives.

As for rebuilding, though, they don't know how they're supposed to do it -- or pay for it.

Like most families in the area, they didn't have flood insurance.

"This is the fastest I've seen a major disaster area declared," he said. "We need it."

Homeowners are eligible for the FEMA grants, which the officials said were crucial.

The Younas family says they have no other choice but to apply for it, and they hope it comes through quickly.

"If not, I don't know what we're going to do," one family member said.

People throughout parts of New York and New Jersey can start the process of applying for the FEMA grant either online or on the phone.

To apply for federal assistance, visit https://www.disasterassistance.gov/ or call 1-800-621-FEMA.

Schumer also announced that the infrastructure bill he has been working on for the last several months will address climate change.

"I thought it was great, absolutely," homeowner Marge Kolb said. "I'm so upset that a few people were shouting at them, it's ridiculous. They came here to see and to help us. And they're saying we might get grants, which is money we don't have to pay back? That's fantastic."