'It's devastating': Child struck, killed by own school bus in Brooklyn 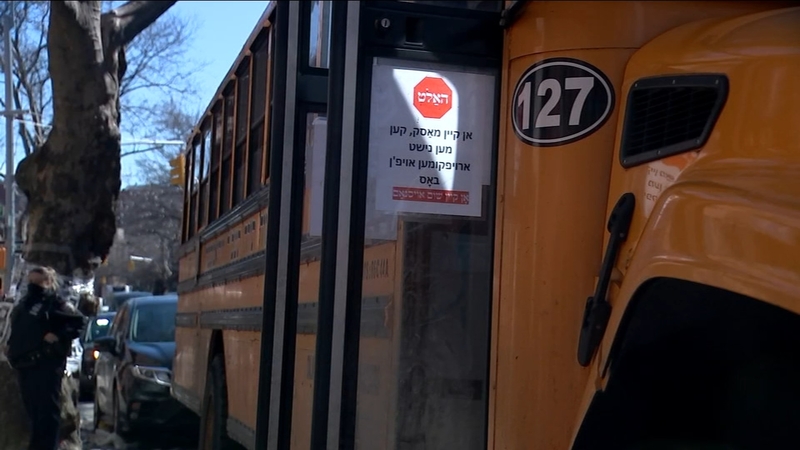 Child fatally struck by own school bus in Brooklyn

WILLIAMSBURG, Brooklyn (WABC) -- A 6-year-old boy was fatally struck by his own school bus in Brooklyn Wednesday morning and was found dead in the street by an MTA bus driver.

The body was discovered on South 5th Street near Hooper Street in Williamsburg at 8:28 a.m.

Police say the boy's 9-year-old brother had just boarded the school bus in the neighborhood where they live, but as the bus pulled away, the other child was struck.
EMBED More News Videos

The boy was found dead Wednesday morning and an investigation is underway.

"Preliminary, we believe the driver did not know he struck the child," NYPD Highway Patrol's Collision Investigation Squad Sgt. Robert Denig said. "The driver is currently being interviewed by detectives at the 90th Precinct."

Police said the 6-year-old, identified as Shimon Fried, was supposed to have boarded that same bus, and it's unclear how the tragedy happened.

The crash caused "significant" injuries all down the golfer's right leg that featured rods, pins and screws.

"It's devastating," Denig said. "The collision investigation squad is tasked with the responsibility of investigating fatal and near fatal collisions. The investigators are extremely professional. They deal with this all the time. It's always heartbreaking, and yes, when its a child, it's that much more heartbreaking."


The MTA bus driver was on her route when she spotted the child in the roadway just two minutes later. She stopped and called dispatch, who in turn called 911.
"This is a tragedy for all involved, and our hearts go out to the child's family as well as to our colleague driving the B60 bus that came upon the scene and first discovered the horrible aftermath," MTA Bus President Craig Cirpiano said. "We are fully cooperating with the NYPD investigation and providing all possible support to the bus operator as she recovers from trauma."

Jose Ramirez lives next door to the boys. He says he saw several children often playing.

"They would play with their bikes, they shoveled the snow," he said.

As investigators begin trying to find out exactly how it happened, neighbors have a lot of questions too.

Shlomo Schreiber, who is developing a building down the block, was in tears.

"I was crying," Schreiber said. "It's indescribable. I don't know how the parents can ever go back home and see an empty bed. It's so hard. It's so hard."


Cecilia Perez was so shaken by what happened she bought flowers and candle that she placed near the scene.

"Even though we don't know each other, we're still a community here," Perez said while wiping away tears. "I just wanted to do something for him."