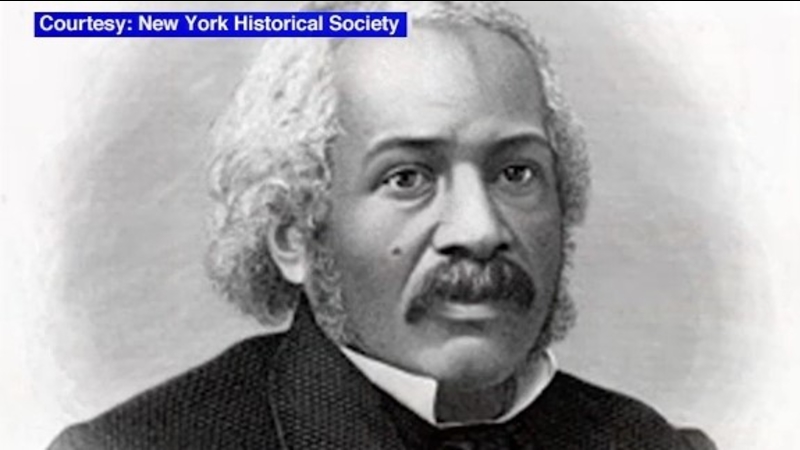 NEW YORK CITY (WABC) -- As we celebrate Black History Month, we're honoring a man whose name may not be familiar to most New Yorkers. But his work in medicine and for social justice, Dr. James McCune Smith had a lasting impact on the city.

Freedom, education, and access to health care were opportunities all too often out of reach to African Americans in 1813, when Dr. Smith was born.

He pioneered a path to change that.

His mother was a former slave, and Smith proved to be a prodigy at an early age.

"When he was 11 years old, he was speaking up for the abolitionist movement," New York Academy of Medicine President Dr. Judith Salerno said.

As Bronx resident John Lemon headed into a church in the Bronx to get a COVID-19 vaccine, the 84-year-old was skeptical -- a sentiment shared by many in Black communities.

"Dr. Smith was denied admission to the medical programs in the US at that time," said Fabienne Snowden, MSW, Ph.D, of Medgar Evers College

Denied because of the color of his skin. But with the financial support of abolitionists, Smith chased his dream across the ocean, attending Glasgow University in Scotland to become a trailblazer -- the first African-American to earn a medical degree.

He returned to New York with a mission.

"He started a clinic for white and Black patients in Lower Manhattan," Dr. Salerno said. "He became the medical director of the Colored Children's Asylum, which was a charitable organization, and he cared for children there."

His clinic also provided a place where many escaped slaves found help.

"He was also part of the Black Freedom Movement and a feminist, right along with his peer Frederick Douglass," Snowden said.

A New York City restaurant known for its biscuits and brunches, is paying tribute to Black History Month through art.

Dr. Smith achieved so much in his life, but not the recognition he deserved from his colleagues in the medical community.

"He was denied a fellowship in the academy and that distinction simply because of the color of his skin," Dr. Salerno said.

In 2018, the New York Academy of Medicine honored him with a special posthumous award of academy fellowship.

"It was 171 years overdue," Dr. Salerno said. "We had to make this happen because it was a wrong."

Dr. Smith remained a champion for economic and social justice until his death in 1865.

"Why isn't he in all of our history books?" Dr. Salerno said. "Why aren't are kids learning about him? We need to tell these stories."