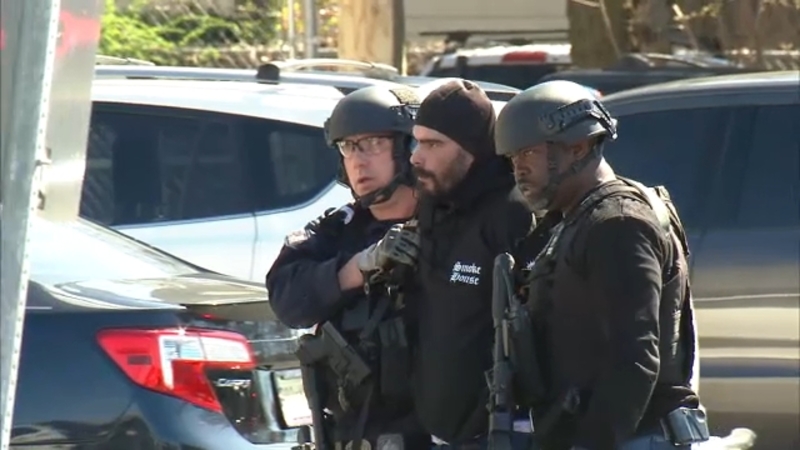 JERSEY CITY, New Jersey (WABC) -- Police in New Jersey have arrested a man after he barricaded himself inside a car and claimed to be armed, according to authorities.

Jersey City Police say they received a call from the North Bergen Police Department around 10:45 a.m. on Tuesday, to ask for assistance, after they say a man was armed and barricaded inside a car on Clinton Avenue and Kennedy Boulevard in Jersey City.

North Bergen Police say they were conducting an investigation linked to a robbery on April 9, at the Grand Food Mart in North Bergen.

North Bergen detectives were able to track the suspect's vehicle for over 50 blocks into Jersey City using surveillance video.

Their investigation found that the suspect's vehicle had been reported stolen out of Bloomfield on April 8, and a street sweeper ticket on Tuesday revealed the location of the car.

North Bergen police say they notified the Jersey City Police Department that plain clothes detectives would be going into the area to investigate further.

Detectives found the suspect either resting or sleeping in the vehicle.

Once the suspect opened the door, officers say they recognized him as the person who robbed the food mart.

They say he matched the physical description and was wearing the same exact clothes, including the same black sweatshirt with white lettering that was captured on surveillance.

Officials say detectives attempted to arrest the suspect, but he was able to re-enter his car, but could not get away.

They say the suspect claimed to have a handgun between his legs and hid his hands.

After approximately five hours of negotiation, they were able to convince the suspect to peacefully surrender, uninjured.

Officials say the suspect claimed to be armed, but did not have a weapon on him at the time of the arrest around 3:20 p.m.
They say they are waiting for a warrant to search the car.