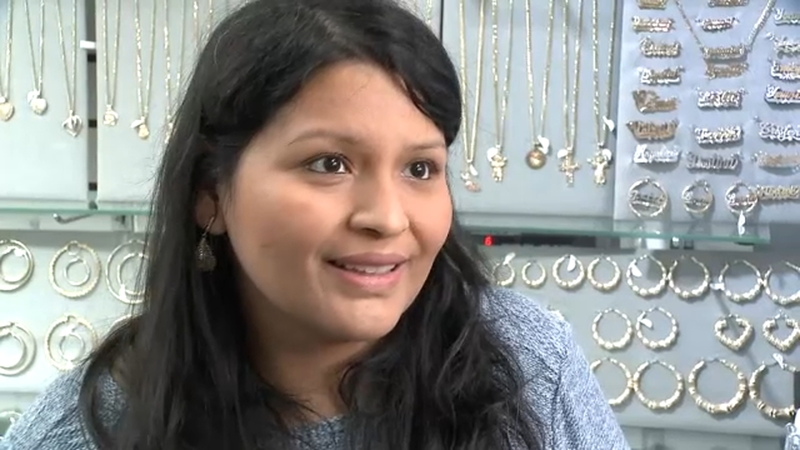 FORDHAM HEIGHTS, Bronx (WABC) -- Brazen thieves that have targeted jewelry stores in broad daylight throughout the city have left one Bronx store owner frightened that her hard-earned work will be stolen.

"I was angry, and I was frustrated," said Marjory Amoros of Grand Jewelers. "But at the same time, it's like, why? You know?"

She was working in her jewelry store on the Grand Concourse when suddenly, she heard breaking glass.

A man with a sledgehammer was smashed her storefront. He pounded the window until it shattered, then he and an accomplice, grabbed fistfuls of jewelry. This all happened at 4 p.m.

"It was just a matter of seconds where they took everything they could at the moment," Amoros. "It's a very scary moment. You're not expecting something like that."

It was just one of a series of smash-and-grab robberies throughout the city.

At least 18 of them, are said to be the work of the same thieves.

"I don't know how I would feel if I own a business like that, and something scary like that happens," deli clerk Ezzaldeen Alkushtary said. "But what can you do? She couldn't do nothing. They just came in and they did it, one two, three."

Amoros has owned the store for eight years, but rising crime in the city has left her disillusioned.

"It's just sad, what's going on now, especially now in this community," she said.

She's afraid that if this continues, a lot of businesses are going to close.

"Because they're going to say, 'why am I going to continue working for someone else to come in and take my hard work,' you know," she said.

Like many shopkeepers on the Grand Concourse, Amoros shuts down her store at 7 p.m.

Getting robbed was always a risk after dark, but times have changed, and merchants are now no less vulnerable in the middle of the afternoon.