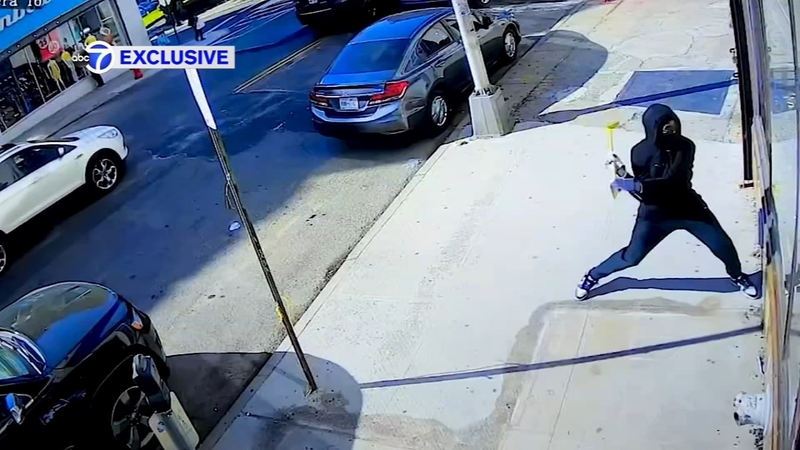 It happened just before 5:30 p.m. Thursday at Golden Square Jewelry on South Broadway.

The video shows the suspects, all in hoodies and masks, outside of the storefront before they start swinging at the glass window with sledgehammers.

Once the window was shattered, they started grabbing all they could.

On the other side of the glass, one of the owners' son tried to fight off the thieves.

"That's safety glass, that's not easy to come down in one piece," co-owner Ahmed Eltawil said. ""My son was here. He ran to the window."

Jose Bacacela, the jeweler, ran outside and picked up one of the robbers' sledge hammer and tried to stop them from getting away.

Police said they made off with $100,000 worth of merchandise.

The men fled in a car that later crashed into a house on Marshall Street during a police pursuit, and the suspects fled on foot.

"I hear this long screech, but I'm still kind of laying down," witness Ed Joseph said. "All of a sudden I hear more and more sirens...The helicopters were going over until like 8 o'clock at night."

Three were later caught and arrested, while the fourth remains on the loose.

Police say the proceeds of the robbery were found inside the crashed vehicle.

The three arrested suspects are identified as 21-year-old Nykem Alston (aka Tyrese Robinson), 35-year-old Alfred Long, and 21-year-old Alexander Wilson, all of the Bronx.

Alston and Long were each charged with first-degree robbery, second-degree grand larceny, and third-degree burglary.

Wilson remains hospitalized in a local area trauma center as a result of the vehicle crash and will be charged in the near future.

Police are also investigating if the four are linked to similar smash and grab jewelry store robberies in New York City.

"There was also a report of these suspects, in an earlier report, of these suspects casing the jewelry store in other part of city same day," Police Commissioner Christopher Sapienza said. "So we're going to look at everything to see what's connected."