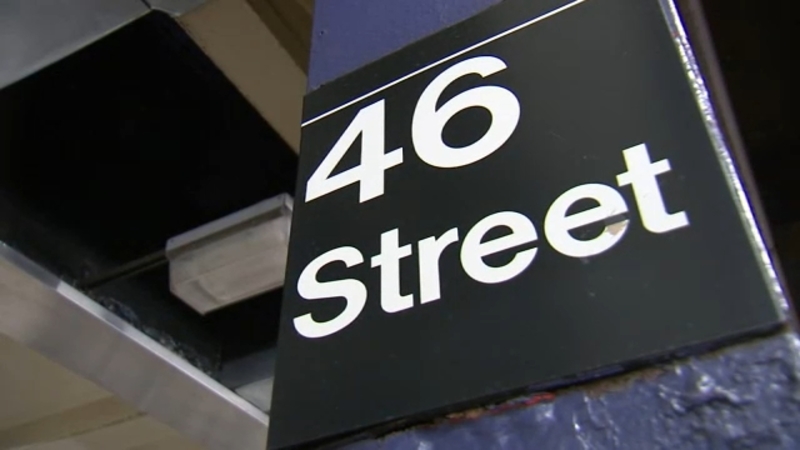 ASTORIA, Queens (WABC) -- A man "with an arrest record as long as my arm," according to NYPD Commissioner Dermot Shea, pushed one subway rider onto the tracks in Queens and then attacked another later in the day Thursday.

Authorities say 35-year-old Jose Martinez was arrested in connection with both incidents, which happened at the 46th Street and Broadway station in Astoria and the 61st Street and Roosevelt Avenue station in Woodside.

Shea cited the arrest, and two other attacks by parolees this week, in an interview with CNN Friday.

"I can't tell you how angry I am about this," Shea said.

Mike Marza has an update on a arrest of a man connected to a brutal attack in Midtown Manhattan.

Martinez allegedly first punched a 17-year-old in the face and pushed onto the tracks just after 11 a.m. Thursday.

That teen, Edgar Quirizumbay, said he was just waiting for a train when a stranger walked up.

"He approaches me, and he had his fist clenched," he said. "He tried to punch me with his left hand, but I reacted to it. And then after that, he grabbed me with both hands on my right shoulder and then pushed me onto the tracks."

He said the man, whom he had never seen him before, leaned over and yelled at him while he was on the track bed.

Quirizumbay pulled himself onto the R train platform and was taken to Mount Sinai Queens for treatment of leg pain.

Martinez fled the scene, police said, but he was not as lucky after he attacked the second man.

Police say he pushed that victim, who was waiting for his girlfriend, against the wall and demanded, "Where are you going, and why are you trying to run away?"

Martinez allegedly pulled a knife and put it on the man's chest.

A struggled ensued, and the suspect fled. The victim and a witnesses chased after him and held him for police.

A knife was recovered at the scene .

He has at least 13 prior arrests, including for robbery, forcible touching, attempted rape and assault.

A Jewish couple and their 1-year-old son were all slashed Wednesday evening in Lower Manhattan in what is being investigated as a possible hate crime.

"Something is clearly broken here, and it's a crisis," Shea said. "This is who we are putting back onto the street."

Shea said parole laws, only recently relaxed by the state, must be revisited and toughened to prevent criminals, especially those with mental illness, from gaining freedom and attacking innocent people again.

"He shouldn't be allowed, because there's so many other people around my age in this neighborhood, and they all use the train," Quirizumbay said. "So for that man to be out there, it's dangerous for everyone."