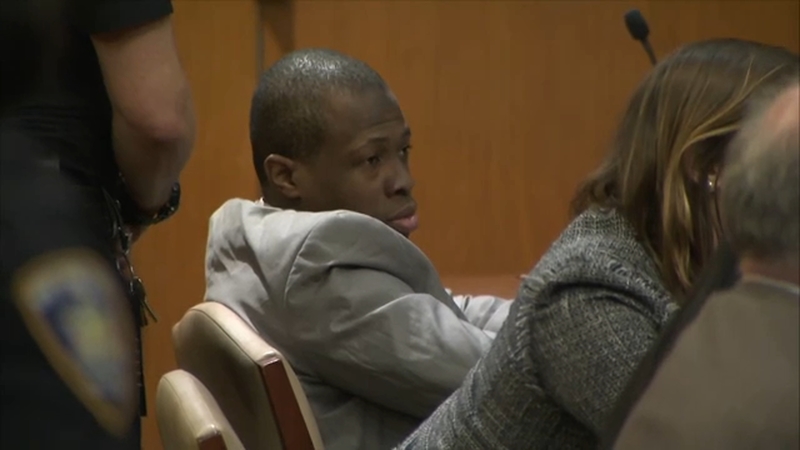 HOWARD BEACH, Queens (WABC) -- The man accused of murdering jogger Karina Vetrano in Queens in 2016 was found guilty on all counts Monday night at his retrial, and on Tuesday, the jury foreman spoke exclusively to Eyewitness News.

Chanel Lewis was convicted of murder and sexual abuse after the jury deliberated for about five hours following the two-and-a-half-week retrial.

Outside his apartment in Queens, foreman Brian Morrissey said the jury had very little difficulty reaching a verdict.

Vetrano's loved ones erupting in cheers as the jury delivered its verdict. A previous trial ended in a hung jury in November, while the second jury stayed into the night to deliberate.
EMBED More News Videos

Jurors began their deliberations just after 4 p.m. following closing arguments. Earlier in the day, the judge denied a defense request for a mistrial over an anonymous letter claiming the prosecution withheld evidence.

The Vetranos also spoke outside their home on Tuesday. They thanked the jurors and said their anger and bitterness are gone as a result of the conviction.

Lewis's attorneys and said they would appeal, and the Legal Aid Society released the following statement:

"We wholeheartedly disagree with Judge Aloise's precipitous rejection of our request for a hearing to investigate potential Brady violations by the New York City Police Department and the Queens County District Attorney's Office that could have well changed the outcome of the case. Exculpatory information was reported and confirmed that was never revealed to the defense and that could have exonerated Mr. Lewis, yet the court declined even to allow exploration of the issue. This is a complete miscarriage of justice. Judge Aloise also kept jurors for well over 12 hours - an unprecedented action - to extract a verdict. Our client did not receive a fair trial. We will appeal immediately to a court that can afford Mr. Lewis the fair review he has thus far been denied."

Sentencing is scheduled for April 17. Lewis faces life in prison without parole.

The motion for mistrial that was denied by the judge came after the Legal Aid Society said it received the letter claiming to be from a police officer that reportedly said police first suspected two white men in the murder and that police conducted a racially based dragnet, claiming more than 360 black men had their DNA taken in Queens and Brooklyn as police searched for their suspect.

Prosecutor Brad Leventhal argued against the validity of the new information.

"This anonymous letter contains no verifiable information," he said in court. "The writer of this letter has an agenda, to derail a trial that is about to go to closing arguments."

Those closing arguments then began, with Leventhal delivering a blistering two-hour summation that included holding up gruesome crime scene photos. At least one juror was brought to tears.

Vetrano's body was found in the reeds of Spring Creek Park in August of 2016, her jogging clothes in disarray. Police say she had been beaten, strangled and sexually abused.

The verdict depended on whether the jury believed Lewis' two videotaped confessions and accepted the DNA evidence found on Vetrano's cellphone, her fingernails and her neck but nowhere else.

If Lewis was the killer, the defense insisted his DNA would have been all over the crime scene.

The jury in the first trial was unable to reach a unanimous verdict, as five of the 12 jurors felt that prosecutors didn't make the case after the defense argued that the videotaped confession was coerced and raised questions about how police collected DNA evidence.
Both of Vetrano's parents testified at the retrial.