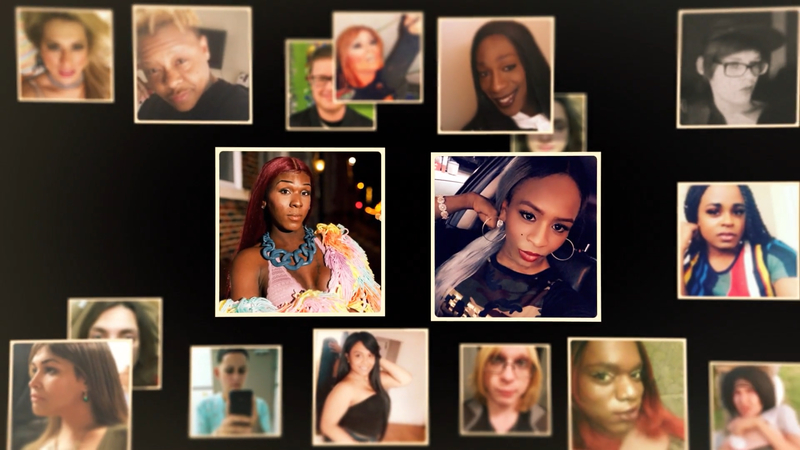 EAST ORANGE, New Jersey (WABC) -- Year after year, the violence against the transgender community continues to be disturbing.

In 2020 alone, there have been at least 16 transgender or gender non-conforming individuals violently killed thus far.

"We're human. We bleed and breathe just like anyone else. We're not odd, we're not freaks, we're not sexual objects or sexual beings," said Kali Marie Higgs, a transgender woman sheltered at the Rain Foundation in East Orange, New Jersey.

The Human Rights Campaign, which tracks these violent deaths, estimates that 4 in 5 of all anti-transgender homicides are transgender women of color.

"We are seeing the second-highest spike, even amid a quarantine, which shows the heightened level of violence perpetrated against trans individuals, and it just doesn't make sense," said Tori Cooper, Director of Community Engagement for the Transgender Justice Initiative at the Human Rights Campaign.

As movements like Black Lives Matter continue to gain momentum, LGBTQI+ individuals and advocates would like to see the ongoing violence against the Trans community be addressed as part of the national conversation.

"I think that it is a charge and call of action to the Black Lives Matter movement and other national movements that they are more incorporative of all the intersections of who we are as human beings and black people in particular, which includes queer, trans, and non-binary folks," said Cooper.

Elaine Helms, founder of the LGBT Rain Foundation, shelters homeless LGBTQI+ individuals in New Jersey and encourages everyone to be compassionate, respectful, and educated on the LGBTQI+ community.

"If you're trying to change society about you, you have to change you. And once you change you, then we can make this place a better place,"