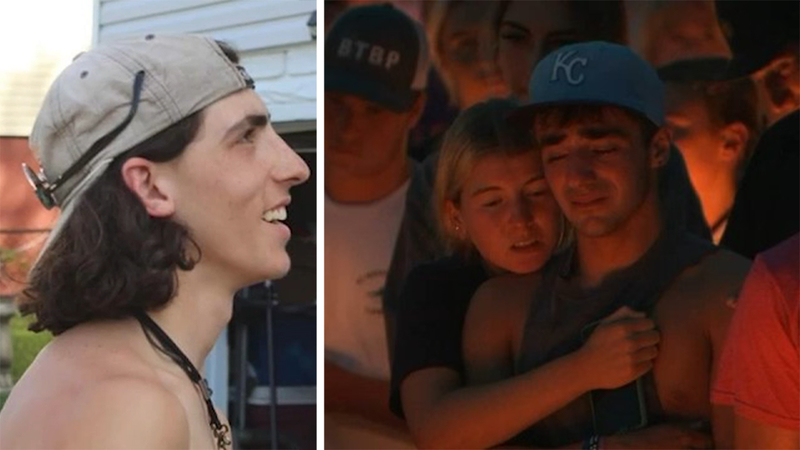 Pinto, of Toms River, was among eight people who were hit by lightning Monday afternoon in Berkeley Township.

The others were taken to local hospitals with injuries that were not considered life-threatening.

The strike happened just after 4:30 p.m. Monday at the 21st Avenue beach, near the entrance gates to Island Beach State Park, just south of Seaside Park.

Now Pinto's family is mourning and his community is in disbelief.

His family knows that thousands of people who never knew their brother have heard about how he died, but on Tuesday, they wanted to talk about how he lived.

"I'll miss him and I hope everyone else sees how good of a person he was," his twin brother Kevin said.

"He was great, he truly made everyone laugh without trying, he was just naturally funny and loving and caring, he would help anybody," his sister Tina said.

An oceanside vigil was held Tuesday night for the 19-year-old lifeguard. The sound of mourning overshadowed the lull of the surf.

The dark beach was lit by hundreds of candles as mourners came out to South Seaside Park.

"Keith would be so happy right now. I'm famous. Anybody that knows him know he's just a big goofball and just loved to have fun," Tyler Pinto said.

Eyewitness News was told Keith wanted to become a marine one day. With that same heart to serve, he died protecting his beach community.

Pinto had been a lifeguard for four years. Both Kevin and his older brother Tyler have also worked as lifeguards, protecting families visiting the Jersey Shore.
EMBED More News Videos

Authorities in Ocean County, New Jersey are investigating after a lifeguard was killed and several others were hospitalized after being struck by lightning while on the beach Monda

His death marks the second death of a young lifeguard at the Jersey Shore in a little over a week.

On Aug. 20, 16-year-old lifeguard Norman Inferrera III died a day after an accident in Cape May, on New Jersey's southern tip. A lifeboat he was rowing was struck by a wave and flipped over, knocking him unconscious, authorities said.

The line-of-duty deaths were extremely unusual for lifeguards, according to Tom Gill, a spokesperson for the U.S. Lifesaving Association. He said the two New Jersey deaths in less than two weeks were just the second and third he can recall in the last 30 to 40 years.

"This just doesn't happen," Gill said. "For two fatalities in such a short time frame in the same general area, this is a tragedy beyond measure."

Berkeley's beaches are closed to swimming through Thursday as crisis counseling is made available to lifeguards and beach staff. People will be allowed to sit on the beach and sunbathe.

Police said an investigation is continuing.