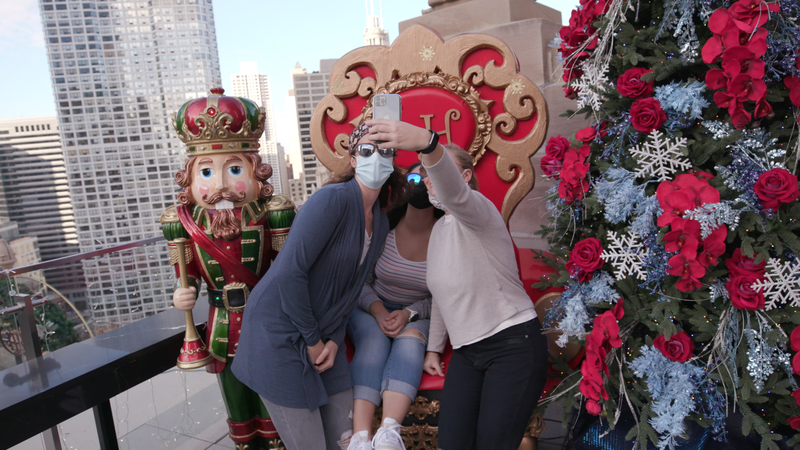 The picturesque rooftop of London House Hotel in Chicago's Loop is typically a popular nightlife destination in the summertime but now, it's helping everyone get into the holiday spirit with its whimsical pop-up dining destination called Rudolph's Rooftop.

"With so many things taken away, it's nice that there's a space where something special is happening," said Chicago resident Carly Nusser.

"We wanted to do something for the holidays this year," said Adam Peabody, general manager of the London House Hotel. "This year everyone had to cancel their holiday plans, we decided to get festive and transform our space into something beautiful."

Peabody said pulling the feat off "felt a bit like Chevy Chase's 'Christmas Vacation.'" The rooftop space is decked out with holiday decor like Santa's Sleigh, reindeer, heated igloos, and thousands of holiday lights.

"Very magical, very becoming for the season," said Michelle Powell, who was vising from Baltimore. "Gets you excited for the season."

"We obviously have the festive atmosphere with holiday decor all over the place, the sleigh, this beautiful British phone booth behind ne, and we have the igloos, which are heated, they are nice and cozy so people can get out of the cold and enjoy some food," Peabody said.

London House Executive Chef Elizabeth Sweeney said in order to create some magic of the season, she turned to approachable comfort foods.

"We're featuring this Bites menu, its lobster mac and cheese that is hearty and sticks to your ribs. We also have a nice chicken pot pie with truffles," she said. "We are also doing a riff on sushi, smoked salmon crepe sushi."

"I am the cocktail purveyor. They're all very Christmas themed," Peabody said. "One is called Sleigh Wreck, that one is is Bulleit Rye, chocolate, mini marshmallows and peanut butter chips. It's served hot."

Peabody said everything is sanitized between seatings and capacity is limited due to COVID-19 restrictions. Reservations are encouraged, and the rooftop is open seven days a week from 11 a.m. to 10 p.m. through January 3.

"I think it's something that gives people a release form everything that has been going on in 2020, probably one of the worst years," he said. "We wanted to give people something to feel good about."

For $500, guests can pre-book private seating in one of the heated igloos. That fee includes 2 cocktails and 2 'bites' each.