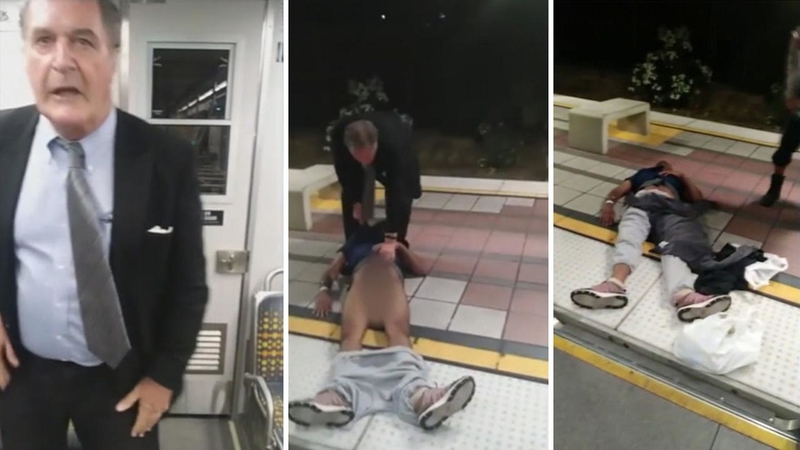 LONG BEACH, California -- A video circulating on social media of a man dragging another man in medical distress off a train and leaving him on a Metro platform prompted a police investigation Thursday.

Long Beach police said around 10:30 p.m. Wednesday, an officer responded to help with a medical call that came from the Metro Blue Line Willow Station.

In the more than six-minute video, an unconscious man is dragged off a Metro train by another man in a suit and then left on the platform as that man gets back on the train. The person recording the video said the unconscious man had suffered a seizure on the train moments before.

The man in the suit then grabbed the victim's belongings and tossed them onto the platform before returning to his seat on the train.

The man recording the video confronted the man on the suit. The two argued for some time and about five minutes later, the man in the suit got off the train to check on the unconscious man. The victim's eyes were closed and he was breathing.

What isn't clear is if the man in the suit committed a crime. Experts Eyewitness News spoke with said he might have.

Metro issued a statement regarding the incident.

"Obviously, this is very disturbing and we never want to see this on our system. We're getting all the facts including reviewing the video from the train and the platform," the statement said, in part.

Long Beach police also said they're reviewing the video to see if a crime was committed. The expert Eyewitness News spoke with said it could possibly be battery and the man's actions may have done more harm than good.

The agency urged anyone who sees a rider in distress to call 911 for medical help.