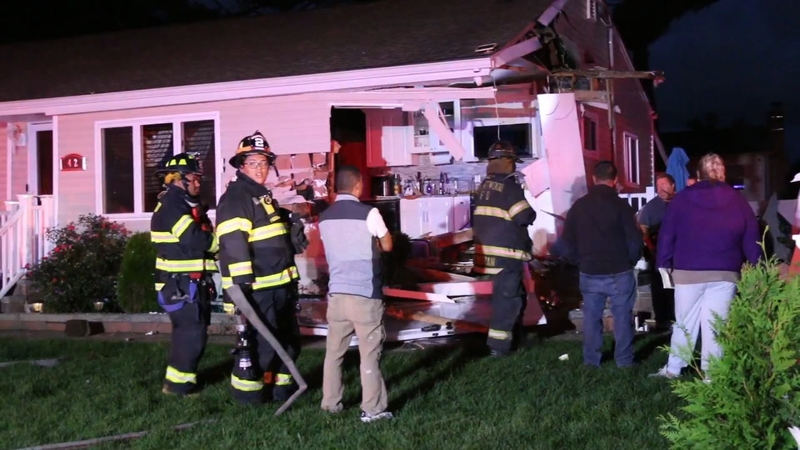 BRENTWOOD, Long Island (WABC) -- A Long Island mother is facing charges for driving while intoxicated after crashing into a home with her three kids inside the car, and home surveillance video shows the harrowing moments when the SUV slammed into the house.

It happened on Blue Jay Drive in Brentwood around 6:40 p.m. Sunday, when police say 34-year-old Ashley Thomas lost control of her 2004 Lincoln Navigator and smashed into the home before coming to a stop on the neighbor's lawn.

On additional surveillance video after the crash, you can hear the screams of the driver's three young daughters.

Luckily, the family that lives there was not inside at the time. They had gone to church and stopped at a friend's house.

"When we got to the place minutes after, we were just a thankful to God that nobody was home because that's exactly where we would be," said Estefany Reyes, the homeowner's sister. "We were just there the night before as a family."

"The people take something and break the window and take the three kids out," witness Yadira Quinones said.

Reyes said it was in the exact spot of impact, the kitchen, where she, her sister, and her sister's three children often hang out.

Thomas and her children, ages 4, 5 and 8, were taken to Southside Hospital in Bay Shore with non-life threatening injuries. Reyes said she's just thankful everyone will be OK.

"The three little girls that were with the lady, they were perfectly fine," she said. "We were able to speak with them. They seemed OK."

The three girls were released to the custody of their father at the hospital.

The crash was apparently caused by a collision in the intersection.

Court documents show she refused to submit to a blood test. A court then ordered the blood draw, which was drawn just after midnight Monday.

Thomas was released Tuesday, and when she was informed by reporters as she left court that the homeowner has three small children, including a newborn, she said, "God bless the kids. God bless the newborn and I apologize about the kids."

She didn't specify whether she was apologizing for allegedly endangering her own children or the homeowner's children.