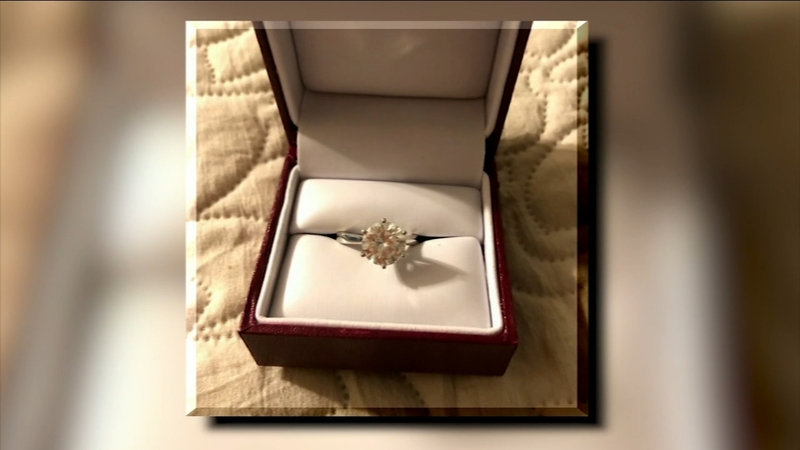 She was washing her hands and left it on the back of the toilet. The couple had only been engaged four weeks prior.

The whale was seen spouting water and making its way through the river near Pier 84.

Longo, 70, spent a week trying to find the ring and went back to the store several days in a row to ask customers if they had seen the ring.

Little did Longo know that the ring was in the possession of Bill Bering, of Fredericksburg, Pennsylvania.

Bering had gone into the bathroom shortly after Longo's fiancé and spotted the ring.

"If this was going to get to where it's supposed to be, it was going to be done by me - only me," Bering said, recounting his thoughts upon seeing the ring.

Bering put the ring in his pocket and waited outside in his car.

"I ate out in the parking lot watching, hoping that I'd see a frantic woman run to the front door," he said.

Bering didn't, so he returned to Pennsylvania knowing he would be back to Long Island the following week for work. Bering owns a real estate company.

He says that he and his wife kept the ring safe at his home, knowing a couple out there was agonizing over its whereabouts.

Bering returned to Suffolk County the following Friday and went to the bagel store.

Workers at the bagel store told Eyewitness News that Bering has been coming into the store every Friday for the past several years.

He asked an employee if anyone was missing anything.

The employee, he said, responded with a resounding, yes.

Longo had left his contact information with the bagel store employees, so they called him.

He rushed over and retrieved the ring from Bering.

"It's not a big deal," Bering said. "I just wish and hope that there are a lot of people out there like that that do the same thing."

Bering joked with Longo that he had to propose again to his fiancé that night over a bottle of wine.