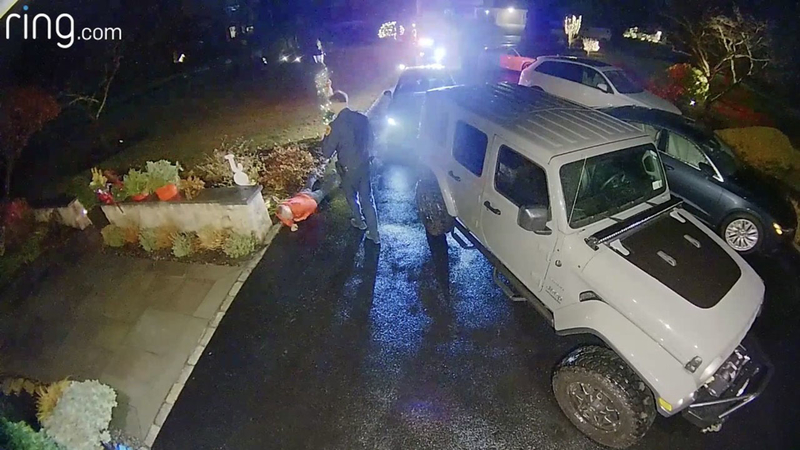 WEST ISLIP, Long Island (WABC) -- A Long Island man has filed a federal lawsuit against a Suffolk County Police officer for excessive force, alleging the officer used a taser on him during an apparent traffic stop.

Craig Costello, 52, said the January 3 encounter began in the parking lot of the CVS located on Montauk Highway in West Islip.

Costello, of Oakdale, was texting in his car when he says the officer pulled up next to him and rolled down his window.

"He's looking at me and he's like, 'Hi,'" Costello recounted the officer saying to him.

Costello said the officer drove away while Costello drove to his brother's house less than a mile away.

Costello said as he exited his car, he saw bright, flashing lights of the police car and saw the uniformed officer running at him.

"Just running straight at me and flying, leaping front kick to my chest," Costello said.

Ring video captured the moments after in which Costello shouted at the officer, "Dude, I don't even know who you are!"

The officer then fires the taser. Costello falls to the ground screaming in pain.

The officer tells Costello to stay down and put his hands behind his back.

Costello asks the officer why he tased him.

"What did I do? Who are you?" Costello asks the officer.

"Put your hands on your back. I'll tase you again," the officer responds.

Costello asks him again why the officer tased him.

"You're wanted," the officer replies.

"For what?" Costello asks.

"I already told you," the officer says.

Costello was arrested for aggravated unlicensed operation of a motor vehicle. Costello had several unresolved traffic violations causing his license to be suspended.

"There was absolutely no reason for any force at all to be used. He should have written him a ticket and let him go on his way," said Costello's attorney, Bruce Barket.

The Suffolk County Police Department would not discuss the incident because its policy is to not comment on pending litigation.