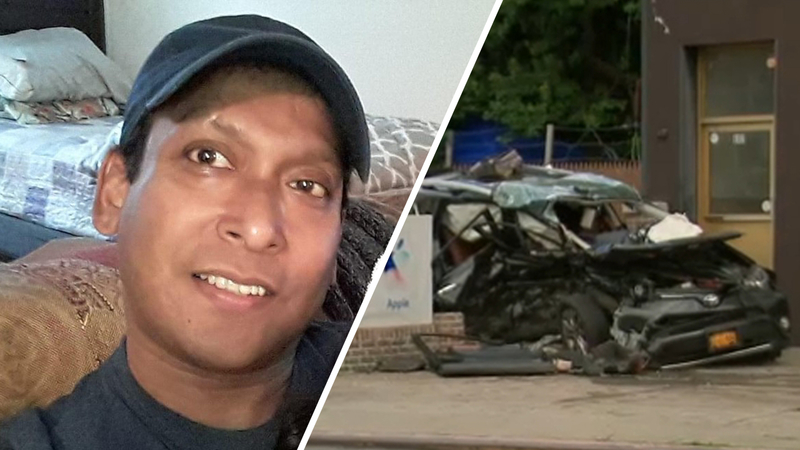 MASPETH, Queens (WABC) -- The family of a Lyft driver was killed by an alleged drunken driver in a crash Sunday morning in Queens is speaking out.

Family identified the Lyft driver as 47-year-old Mohammed Hossain, a father of three who lives in Brooklyn.

His brother-in-law tells us the family is in shock.

"It's just, when the person you just spoke to a few days ago, joking, and then they're not there. It doesn't make sense," Rezaul Rahman said.

"I went in and saw her on the phone, she looked at me and started crying, at that point you don't know how to feel," Rahman said.

Even more painful to learn the driver of the other vehicle was allegedly drunk.

"He took somebody's life, destroyed generations. His kids- he took a father away," Rahman said. "He needs to repent and know what he did and what he did was wrong. We have to make sure the law takes care of him."

A GoFundMe has been set up for Hossain's family.

The incident happened at around 4 a.m. at the intersection of Fresh Pond Road and Elliott Avenue in Maspeth.

Police say 22-year-old Erik Chimborazo was drunk when he ran a red light and T-boned Hossain's car. Surveillance video showed the impact of the crash.

Hossain was taken to Wyckoff Hospital where he was pronounced dead.

Authorities say Chimborazo left the scene on foot, but later returned and was arrested.

He was taken to NYC Health + Hospital / Elmhurst for evaluation.

Neighbors reacted after hearing about the crash.

"It sounded like a car crashed into a parked car," resident Mike Boyle said. "It didn't sound like a thing at high speed to me, and I was surprised when I saw what happened."