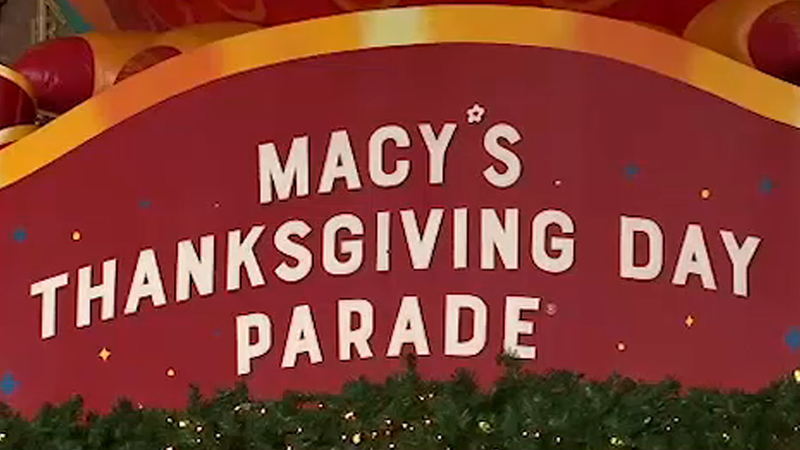 NEW YORK (WABC) -- Rehearsals got underway Monday for the Macy's Thanksgiving Day Parade amid the potential for high winds that threaten to ground the iconic balloons.

Broadway stars, celebrities and various performance groups will begin to prepare for the annual event, which is broadcast to millions around the nation.

But there are worries over the weather's impact on the parade, as under New York City law, balloons cannot fly if sustained winds exceed 23 miles per hour or if gusts are stronger than 34 miles per hour.

If it is too windy, the balloons will be grounded and walked through the streets.

Back in 1997, on a very blustery Thanksgiving Day morning in New York City, the iconic Cat in the Hat balloon got caught up in some strong wind gusts.

"We are always attuned to weather conditions for the Macy's Thanksgiving Day Parade. We monitor the weather on a daily basis, but at this time, it is too early to make any determinations regarding the flight of the parade's giant balloons, as we use on the scene data versus forecasts. The parade takes place rain or shine. We have a number of weather operations in place, which include continuous monitoring of conditions on site by a licensed meteorologist, who is also in direct communication with the National Weather Service. Along the parade route, there are several weather monitoring stations. In addition, the assistant pilot on each giant balloon carries a wind meter, which is also monitored by an NYPD representative. Based on the city's guidelines, no giant character balloon will be operated when there are sustained wind conditions exceeding 23 mph and wind gusts exceeding 34 mph. On parade morning, Macy's works closely with the NYPD, who, based on the current weather data and the official regulations determine if the balloons will fly and at what heights. Each is designed to fly at different heights and angles based on their shape and scale and the exact wind conditions along the route. The decision on adding the balloons to the lineup is made just prior to the start of the parade and takes into account the weather data along the entire parade route and information from nearby weather stations."