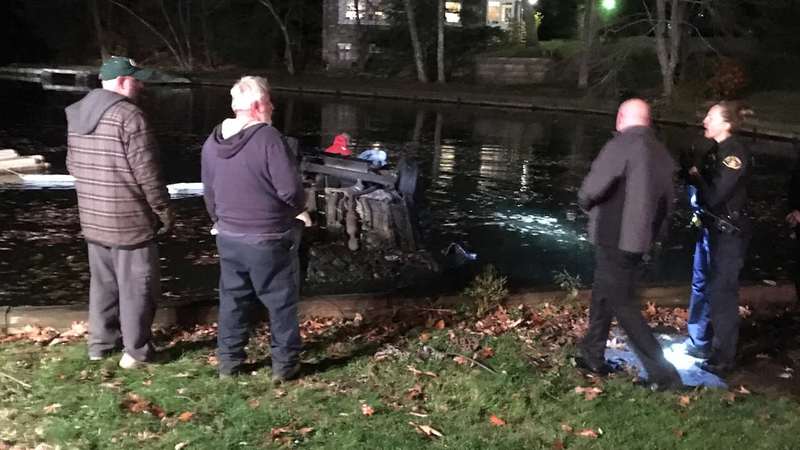 MAHOPAC, New York (WABC) -- A teenager is being hailed as a hero after saving two 17-year-old girls from a car that crashed into Lake Mahopac Thursday night.

The driver of the vehicle, a 2009 Toyota Matrix, was reportedly speeding on North Lake Boulevard when she lost control, slammed into a telephone pole and then flipped over into the lake.

"We kind of just lost control of the car, and it started swerving," passenger Julia Brower said. "She tried to fix it as best she could, but there was just no hope."

Cullen Malzo, 19, heard the accident from the driveway of his nearby home.

"I hear the crash," Malzo said. "They crashed through the support pole, and then they flew in the water."

He called 911 and then quickly jumped into the lake to try and rescue the girls from the vehicle.

"I'm yelling at the car to see if I can get a response, but I don't hear anything," he said. "So I take my jacket off and my shoes and I jump in."

With mud up to his chin, Malzo said he couldn't get the door open. So he got back out to search for a rock. Meanwhile, the disoriented Brower was busy searching for an air pocket in the vehicle.

"And then all of the sudden, I see a hand come up from where the window was and just pull me out," she said. "And then he went to go save Dana, and he pulled Dana because her feet were near the window. So he just pulled her foot out from the window."

Police were at the scene within a minute, but both girls were out of the car when they got there. The teens are extremely grateful to Malzo, who happened to be in the right place at the right time.

"I gave him like 400 hugs when I was out there," she said. "The cops would be asking questions, and I would just go over and hug him. Because he deserved so much more (than) my wet soggy hugs."

Both girls were transported to Westchester Medical Center for evaluation.

"When I got out, I was really cold," Malzo said. "It didn't hit me that it was the middle of November."