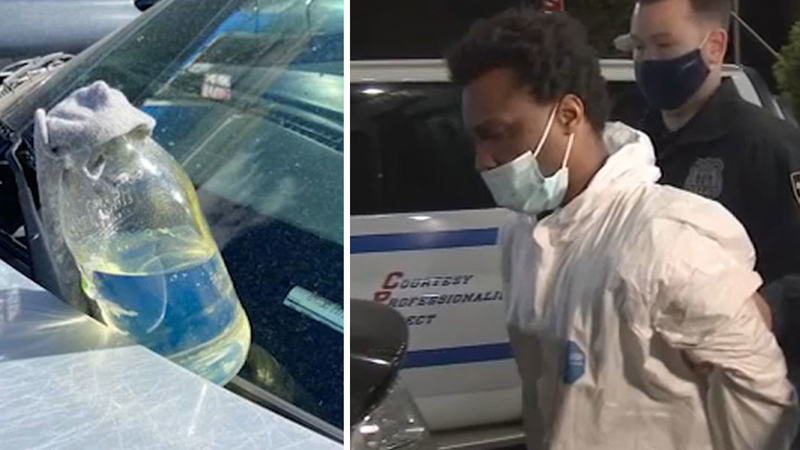 EAST FLATBUSH, Brooklyn (WABC) -- A Connecticut man admitted to throwing a cup of bleach in the face of an NYPD officer during a Saturday morning traffic stop in Brooklyn, and then tossed a lit Molotov cocktail at a pursuing NYPD cruiser to "hurt the police," knowing it would "spark a fire."

A man was arrested after throwing a chemical and a Molotov cocktail at officers when they pulled him over in Brooklyn Saturday.

Virgile admitted that, for at least two weeks, he had been driving around with six Molotov cocktails -- ready to attack police.

During the virtual hearing, prosecutors stressed Virgile's actions proved he has absolutely no regard for police and people living in this neighborhood in East Flatbush, and said the end result could have been severe.

"The defendant is charged with arson...a crime of violence and a crime of terrorism," Assistant U.S. Attorney Sara Winik said during a virtual court appearance.
EMBED More News Videos

There are new details after a man threw a Molotov cocktail at police in a scary encounter for NYPD officers Saturday.

Winik said the defendant's brutal and entirely unprovoked attack on NYPD are both a danger of the community and flight risk.

She added the brutal attack this weekend on NYPD officers shows Virgile is an ongoing danger to law enforcement and the larger community.

"(Virgile) threw what he later admitted to be bleach at an officer's eyes," Winik said. "Defendant's action could have blinded the officer."

Winik said when the suspect fled and threw the Molotov cocktail at a police cruiser, it was fortunate that it hit the window and fell to the ground without exploding.

According to the assistant U.S. attorney, she said Virgile knew police were inside the vehicle and knew peoples homes were nearby.

Winik said Virgile had been driving around with the Molotov cocktails at the ready to attack the police.

The defendant admitted he had watched YouTube videos about explosives and stated that he wanted to purchase explosives.

Winik said it appears Virgile "was living out of his car, which would be next to impossible for pretrial to supervise" if he was released on bail.

"Mr Virgile is a danger to the community and a flight risk." Judge Robert Levy agreed.

The suspect's brother spoke exclusively to Eyewitness News and along with other family members say the defendant is bi-polar, refused to take his medication and recently was brought to the hospital and released.

Virgile is charged with arson and faces a mandatory five-to-20 years in federal prison if convicted.

He returns to court May 3.