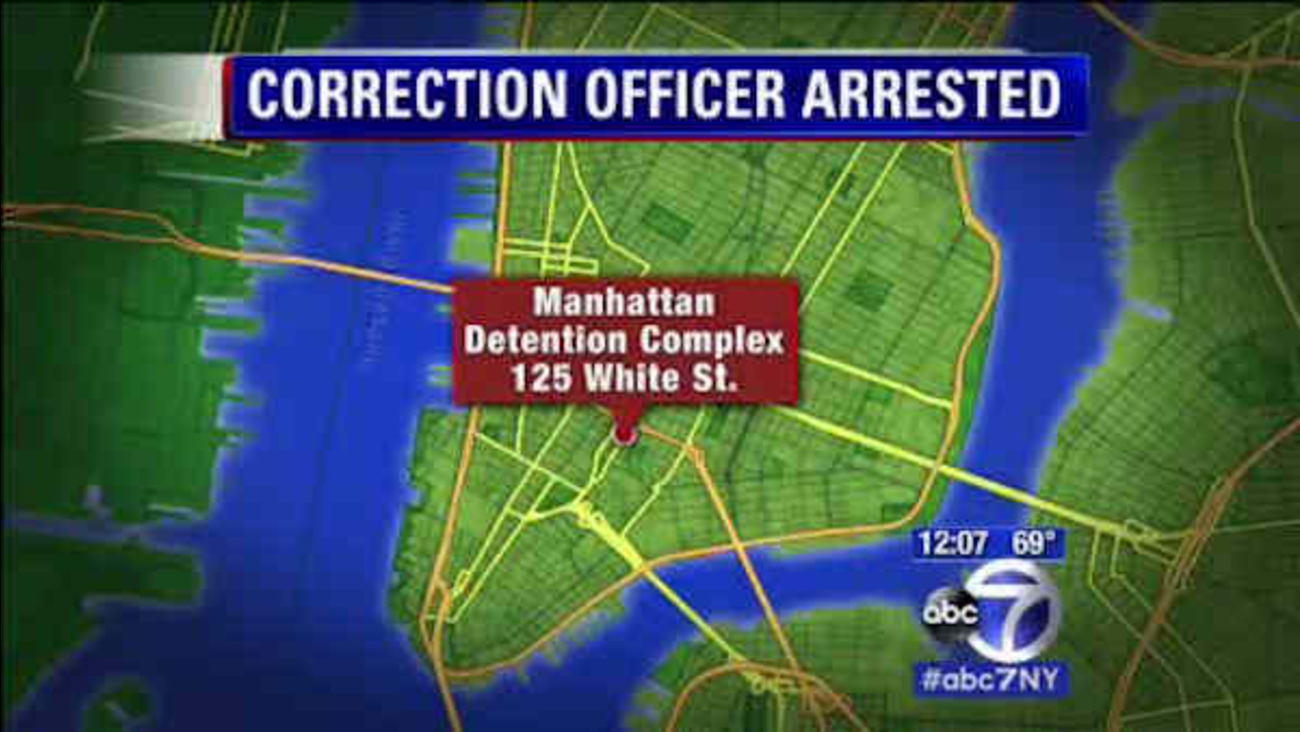 NEW YORK (WABC) -- Authorities say a correction officer, an inmate and two of his relatives have been arrested in a conspiracy to smuggle drugs, cell phones, pliers and other items into the Manhattan Detention Center.

The case was cracked after an undercover posed as an inmate, and investigators also used wiretaps.

Then, in the wake of a drug-smuggling case, police say a sweep of the center turned up an apparent escape plot.

New York City Department of Investigation Commissioner Mark Peters said Thursday that an inmate had neatly tied together 64 bedsheets and stashed them under the sink in his cell.

The inmate arrested in the smuggling ring is identified as 56-year-old Tommy Davis, and his relatives are his 58-year-old sister Velver Jean Davis and 35-year-old niece Khalilah Mattocks.

Authorities say the months-long investigation by the Manhattan District Attorney's Office's Public Corruption Unit and Department of Investigations utilized court-authorized wiretaps and additional evidence to uncover the smuggling operation. According to the indictment and court documents, from December 2014 to May 2015, the defendants together conspired to smuggle dangerous contraband into the Manhattan Detention Center (DOI), including cocaine, marijuana, cellphones, lighters, pliers, tobacco, and what the defendants believed to be oxycodone, among other illegal items.

"We have all witnessed in recent weeks the serious consequences that can result when contraband is smuggled inside prison walls," Vance said. "At a time when stakeholders across the criminal justice system are coming together to ensure that inmates are kept safe - and our prisons are kept secure - this investigation with our partners at the Department of Investigation has exposed an alleged conspiracy involving narcotics, communications devices, tools, and other dangerous items smuggled into the Manhattan Detention Complex by a correction officer. Today's indictment, as well as the recent arrests of additional inmates found to be in possession of contraband, sends a message that corruption and illegal activity within New York City's correctional facilities will not be tolerated."

During the period of the conspiracy, it is alleged that Howard - a DOC Officer with nearly 20 years of experience - was assigned to work in the mailroom of the Manhattan Detention Complex, where Davis was housed as an inmate. According to the indictment, he would allegedly procure for distribution to fellow inmates prison contraband including narcotics, marijuana, cellphones, and other illegal items, such as tobacco. He is then accused of directing his sister and niece to allegedly obtain these items through their own contacts and suppliers, as well as from family, friends and associates of the inmates.

After obtaining various contraband items, Mattocks is accused of delivering the contraband to Howard, who would then allegedly smuggle the items into the MDC and deliver them to Davis and others inside the jail. In exchange for smuggling the items into the facility, Howard was paid hundreds of dollars in cash for her services.

On April 29, 2015, an undercover investigator, posing as an associate of an MDC inmate, contacted Mattocks, requesting that a package containing a cellphone, oxycodone, and tobacco, be delivered to an inmate. Following the undercover investigator's transaction with Mattocks, the phone's Find-My-iPhone feature was activated, enabling investigators to observe the phone moving from Mattocks' apartment, to Howard's apartment, and then to the MDC, where Howard is charged with smuggling it inside.

During another transaction on May 9, 2015, Mattocks is accused of passing a large red shopping bag to Howard containing crack-cocaine and marijuana, as well as three cell phones, various cell phone accessories, lighters, tobacco, rolling papers, pliers, earbuds, and a flashlight. These items were allegedly intended to be smuggled into the MDC by Howard. When she was apprehended, Howard was in possession of $800 in cash, which had been allegedly provided by Mattocks as a fee for smuggling these items into the MDC.

As a result of this investigation, DOC conducted several sweeps of MDC cells, leading to the arrest and arraignment of three other inmates in Manhattan Criminal Court on charges of Promoting Prison Contraband in the First Degree. In one case, 25-year-old Ernest Murphy was arraigned two days ago after 64 bed sheets - tied together to form a rope - were found to be stored in a cabinet under the sink in his MDC cell. In April, DOC officials found a cellphone stored inside a ceiling light fixture in an MDC cell occupied by separately charged defendant Yermi Morel, 37. Victor Mena, 23, was additionally charged with being in possession of significant quantities of contraband, including a cell phone charger, a roll of black tape, two latex gloves containing marijuana believed to be over 25 grams, and a scale.
Related topics:
new york citysmugglingcorrection officerdrugdrugs
Copyright © 2022 WABC-TV. All Rights Reserved.
TOP STORIES
At least 46 bodies found in 18-wheeler in San Antonio
3 dead, at least 50 injured after Amtrak train derails in Missouri
Video: Giuliani slapped on back inside supermarket, worker arrested
AccuWeather: Picture perfect
"Nobody saw..." New questions after a girl drowns in a rented pool
Video shows man stealing puppy, riding off on scooter in NYC
Actress Mary Mara dies at 61 after drowning in river: police
Show More
Westchester Co. reproductive healthcare legislation up for vote
2022 Jimmy Award finalists step into the spotlight
NYC mayor takes aim at garbage piles, illegal dumping
'Full House' star shoved by police during Roe protest, video shows
Truck carrying fireworks catches fire on I-287 in NJ
More TOP STORIES News