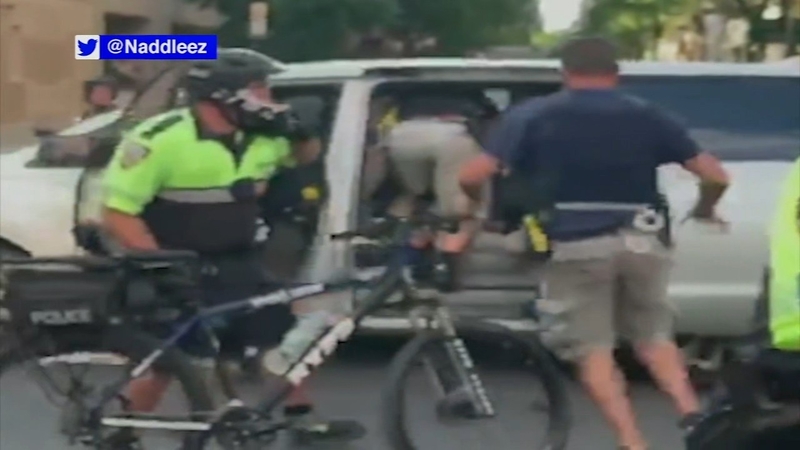 A group claiming to fight for Black liberation was involved in several altercations with police Tuesday evening.

The rally started on Second Avenue and East 25th Street, where an 18-year-old woman was taken into custody by an unmarked police vehicle, while bike cops held the crowd back.
EMBED More News Videos

New York City officials are demanding answers after a woman's arrest during protests in Manhattan Tuesday.

Protester Christopher Salata says he knew the woman from their time together during the weeks-long sit in at City Hall Park.

"They grab her off the street as she's skateboarding, don't even put handcuffs on her... that's just terrorism," Salata said.

According to police, the suspect, who identifies as a transgender woman, was arrested for past criminal activity in Lower Manhattan.

"The woman taken into custody was wanted for damaging police cameras during five separate criminal incidents in and around City Hall Park," police said. "The arresting officers were assaulted with rocks and bottles."

In regard to a video on social media that took place at 2 Ave & 25 St, a woman taken into custody in an unmarked van was wanted for damaging police cameras during 5 separate criminal incidents in & around City Hall Park. The arresting officers were assaulted with rocks & bottles. pic.twitter.com/2jGD3DT3eV

A law enforcement source says the suspect was wanted for spray painting over the cameras.

Initially, the arrest fueled Twitter rumors, which claimed the woman had been kidnapped.

Plainclothes cops were reportedly looking for known 'bad actors' in the protest.

The NYPD calls this a text book arrest by its warrants squad, which operates in plain clothes to avoid tipping off its targets.

City leaders took to Twitter to voice their concern over the arrest, including New York City Comptroller Scott Stringer.

I’m deeply concerned by the videos circulating of a protester being thrown into an unmarked van.

The incident added new tension to protests that had largely died down in the city.

RELATED | Demonstrations escalate into some clashes, looting again in NYC

However, not everyone agrees with the protesting.

"Enough is enough, it was getting better before George Floyd, but now you're putting the cops hands behind their back and this is why all the shootings and the crime rate are going up so much," said Benny, who grew up in Brooklyn.

The protest continued around the Madison Park area and made its way to Times Square.

There were 12 additional arrests in the aftermath of the incident, mostly for disorderly conduct.

One protester damaged the license plate reader on the back of a police car.

Josh Einiger reports on the ex-SUNY Buffalo football player who was shot and critically injured in Queens.