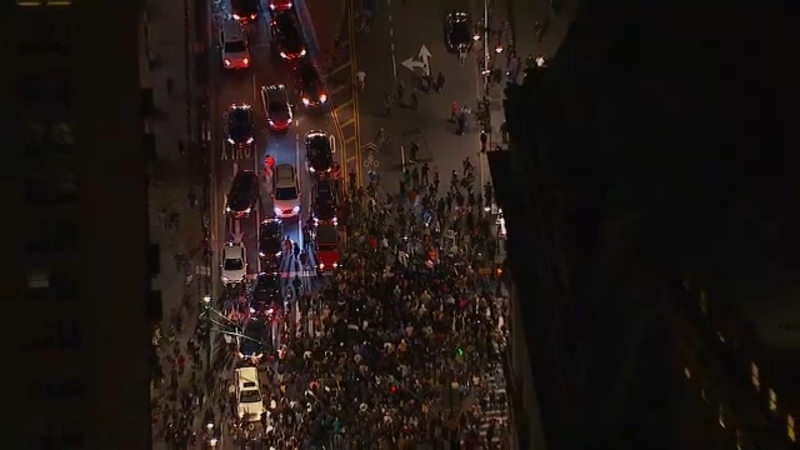 NEW YORK (WABC) -- Large crowds angry over the George Floyd death gathered peacefully for hours around New York City, closing the Manhattan Bridge as they marched from Brooklyn to Manhattan on Sunday night, but by 9:30 p.m. some clashes with police were reported along with small street fires and looting.

NewsCopter 7 was overhead as George Floyd protests broke out for the 4th night in NYC.

Earlier, hundreds of people could be seen marching through Midtown, Manhattan on 5th Avenue, stopping briefly in Times Square before continuing south on Broadway.

The group appeared to be mostly peaceful and the sentiment was that they want justice. Several protesters said the focus should be peace.

At the same time, hundreds more protesters marched on Flatbush Avenue in Brooklyn, making their way toward Barclays Center. Protesters had been gathering outside the Barclays Center throughout the day where police remained on the perimeter.

At times, police and protesters shared moments of peace, kneeling together and even hugging.

Shutting down the Manhattan Bridge. pic.twitter.com/cRl4C3dXBc

In Lower Manhattan, the protesters converged and faced a mass of police officers, but the situation while tense remained non-violent.

Cops corned us on 2 sides and tried to block the street. Police in riot gear threatened us if we took another step so the ENTIRE group dropped to a knee. Kept it peaceful and now they opened the streets. We march on #NYCPROTEST #JusticeForGeorgeFloyd pic.twitter.com/Xlu8fAie1H

By 9:30 p.m., tension gave way to some clashes with police, at least one vehicle fire and looting. One fire burned near the Strand Bookstore. Looters were spotted breaking into a Balenciaga store on Mercer Street.

On Saturday, largely peaceful protests around the city also gave way to scattered clashes between police and protesters later in the evening.

He described them as "people who came to do violence in a systematic and organized fashion." He denounced "an explicit agenda of violence" among some "anarchist movement" protesters and, overall, he said the NYPD demonstrated "tremendous restraint."

There was no loss of life and no major injuries on Saturday, he said.

Multiple police vehicles were set on fire or defaced with graffiti, while 345 people were arrested.

Mayor de Blasio's daughter, Chiara, was among the protesters arrested Saturday night, according to NYPD sources.

33 police officers were injured in demonstrations throughout parts of Brooklyn and Manhattan.
EMBED More News Videos

For the third night in a row, protesters are coursing through the streets of New York City Saturday night. (@buckyturco/Twitter)

Police faced criticism after video circulated on social media that appeared to show a police SUV pushing a metal barrier into a crowd of demonstrators. Mayor de Blasio said in a late night news conference Saturday the police were put in an impossible situation.

"There were many things done right by the NYPD, there were also mistakes that must be investigated," he said.

De Blasio added many protestors were out of control putting officers in bad positions.

"You have to be in those officers' shoes," NYPD Police Commissioner Shea said of the footage.

The investigation will be led by the city's corporation counsel and Department of Investigation commissioner.

Earlier, Shea on Twitter applauded the efforts of police officers under extreme circumstances.

"What we saw in New York City last night and the night before was not about peaceful protest of any kind. It was not about civil disobedience. It was not about demonstrating against police brutality," he wrote. "What it was, quite frankly, was a mob bent solely on taking advantage of a moment in American history, to co-opt the cause of equality that we all must uphold, to intentionally inflict chaos, mayhem, and injury just for the sake of doing so."

To the Members of the NYPD:

What you’ve endured these last couple of days and nights—like much of 2020, so far—was unprecedented. In no small way, I want you to know that I’m extremely proud of the way you’ve comported yourselves in the face of such persistent danger... pic.twitter.com/1ez0Ar17Ex

In Flatbush, police had to use pepper spray because some people in the crowd resorted to throwing bottles and other objects at officers, with more NYPD vehicles vandalized and set on fire.

On Friday night, video surfaced on social media showing a woman being violently shoved to the ground by an NYPD officer near the Barclays Center. In addition, two sisters from the Catskills were arrested for allegedly throwing a Molotov cocktail at an NYPD van occupied by four officers during Friday night's violent protests in Brooklyn. No one was burned.

Shea said his officers will work with demonstrators.

"We're going to make sure that everyone has the right to peacefully protest and assemble," Shea said said at a briefing with the mayor. "But we are not going to tolerate destruction of property, having our officers put into harm's way or any civilians put into harm's way."

Gov. Andrew Cuomo said the National Guard is on standby and that hundreds of additional troopers are being made available in Rochester and Buffalo.

"We expect additional protests tonight and we're preparing for such," Cuomo said at his daily briefing.

Similar protests flared around the nation in response to the Minnesota death of George Floyd. Floyd, who was black, died Monday after a white Minneapolis police officer pressed his knee on his neck until he stopped breathing.