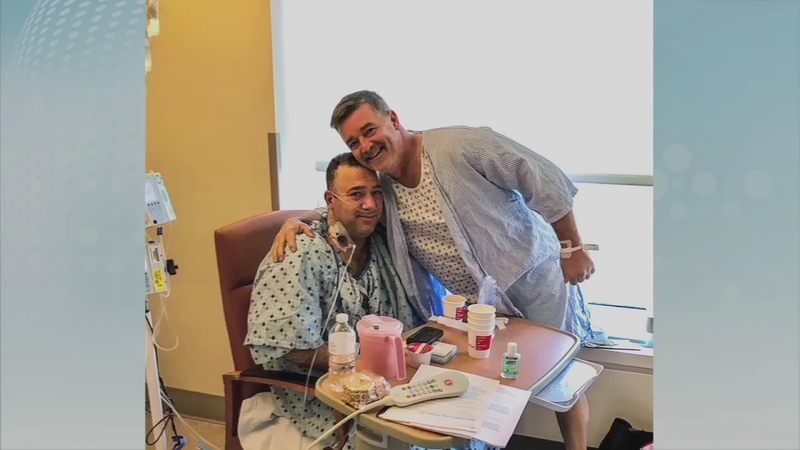 NEW YORK -- WABC is taking you inside NewYork-Presbyterian Hospital for a look at some extraordinary stories that we call Medical Marvels. It's WABC's Emmy-nominated digital series exclusive to abc7NY.com

Retired Mount Vernon police officer Joseph Cappuccilli, 48, was an emergency service first responder on 9/11 at Ground Zero. Four years ago, he began to develop kidney problems due to complications from hypertension and an autoimmune disease. In 2016, he took a turn for the worse. He received a diagnosis of Stage 4 Renal Failure, and became a prime candidate for a kidney transplant. Unfortunately, the waiting period for a kidney transplant can be long, with people waiting 8 or 10 years in New York.

His wife put out a desperate plea over the internet including an appeal on the New York Police Department (NYPD) Facebook page. It caught the eye of a 58-year-old retired NYPD officer, Mark Chamberlain, who was also a 9/11 responder. Wanting to help out another police officer, he came forward for testing without hesitation. The evaluation process occurred quickly enough to avoid the recipient needing dialysis. Today, the patient and donor are doing well. But Dr. Sandip Kapur, Director of Kidney and Pancreas Transplant at NewYork-Presbyterian and Weill Cornell Medicine who performed Joseph's surgery, notes many other people die waiting for a lifesaving kidney donor. He urges good samaritans like Mark to check out nyp.org/organdonation or the National Kidney Registry to find out more about becoming a kidney donor.

The kidney transplant program at NewYork-Presbyterian/Weill Cornell Medical Center, which opened in the early 1960s, is the oldest in New York State. Since its inception, surgeons at NewYork-Presbyterian/Weill Cornell Medical Center have performed more than 5000 transplants. Last year, they were the leading living donor center on the east coast and second largest in the United States.

Joseph is feeling great and says, "NewYork-Presbyterian is second to none!"