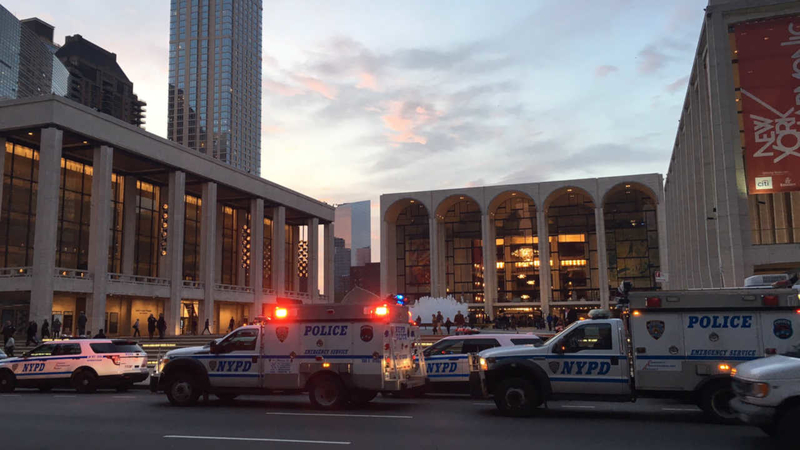 LINCOLN CENTER, Manhattan (WABC) -- The NYPD has interviewed the man who they say sprinkled some kind of powder into the orchestra pit at the Metropolitan Opera House, prompting an evacuation from the theater.

The man, whose name has not yet been released, told police he had sprinkled the cremated remains of his friend into the pit.

A performance at the Met was halted Saturday after officials say the man sprinkled an unknown substance into the orchestra.

Update #METOpera: Stretcher brought in and out with inflated suitcase device at 17:40. 7 police vehicles onsite pic.twitter.com/K5ZO4KZRKI

The FDNY and NYPD responded to Lincoln Center during intermission at the afternoon performance of 'Guillaume Tell'.

In a news conference Saturday, the NYPD said multiple witnesses told them that the man who sprinkled the substance was from out of town, and indicated that he wanted to sprinkle the ashes of his mentor during the performance.

Investigators say the man didn't say anything as he spread the substance. He was seen on surveillance video, casually walking away.


As a safety precaution, the Met canceled the remainder of the performance. In addition, Saturday night's performance of 'L'Italiana in Algeri' was also canceled.

Met Opera General Manager Peter Gelb said that none of the musicians were hit by the ashes, and that the Opera will be open for business on Monday. He also added that the organization hopes people will continue to come to the opera, but will 'leave their ashes at home'.

A Met representative at first announced that a technical issue was causing the delay, then returned a few minutes later to announce that the fourth act would not be performed. The audience was told to go home.

"Everybody kind of slowly walked out," said Dylan Hayden of Toronto. "As we were exiting the building, I noticed the counterterrorism unit going into the building."

No one was injured. An audience member says the evacuation of the opera house was calm.

"There was no panic, which was probably wise they didn't start announcing something about white powder," said audience member Ellen Marcas.

If it turns out the substance is actually ashes, police say it's not even clear if a crime was committed.

Miller said several audience members said a man told them he was there to sprinkle the ashes of a friend, his mentor in the opera.

Miller said the man was in front of the first row of seats when he sprinkled the powder into the orchestra pit during the second intermission when most of the musicians were not present.

He said the powder will be tested, but the possibility that it was in fact human ashes "is certainly an area that we are pursuing."