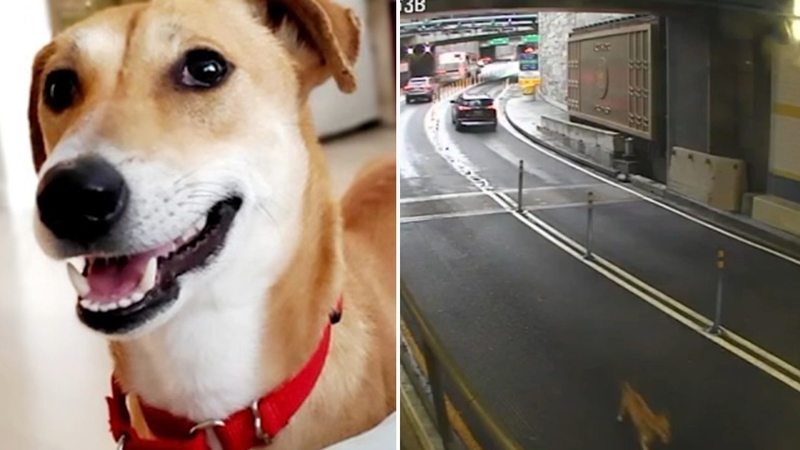 UPPER WEST SIDE, Manhattan (WABC) -- New Yorkers across the city came together to help track down a woman's missing dog who went on quite the borough-spanning adventure.

Cops and good Samaritans are credited with helping find and reunite the runaway dog with her frantic owner.

Drivers couldn't believe their eyes on Tuesday when a dog ran through the Queens-Midtown Tunnel - narrowly missing oncoming cars.

Caholo, who normally responds to vehicle issues in the tunnel, got the 911 call and stopped oncoming traffic while his officers went in after the quick canine.

She got away through the Queens side of the tunnel, but an animal-loving dispatcher found the evasive pet on a missing dog Facebook page and contacted the owner.

She confirmed it was her dog, Indie, a rescue from India who had been living on the Upper West Side for three months when she escaped from her dogwalker earlier that day.

"So Indie made it from the Upper West Side all the way into Long Island City, it was the most amazing effort, I mean I was so humbled by it," said Indie's owner, Heather Angus.

A week later Indie was by a worker in a Long Island City warehouse and was living with stray cats.

She was finally reunited with her owner.

"I've lived in the city for 11 years so it was amazing to see this community effort, it's such a big city, a community can help out one person and touch so many hearts," Angus said.

After hundreds of online postings and sightings of Indie throughout the city, Indie has become a local celebrity on the Upper West Side.

Angus is thankful for dog-loving New Yorkers and says her incredible journey home was nothing short of a miracle.