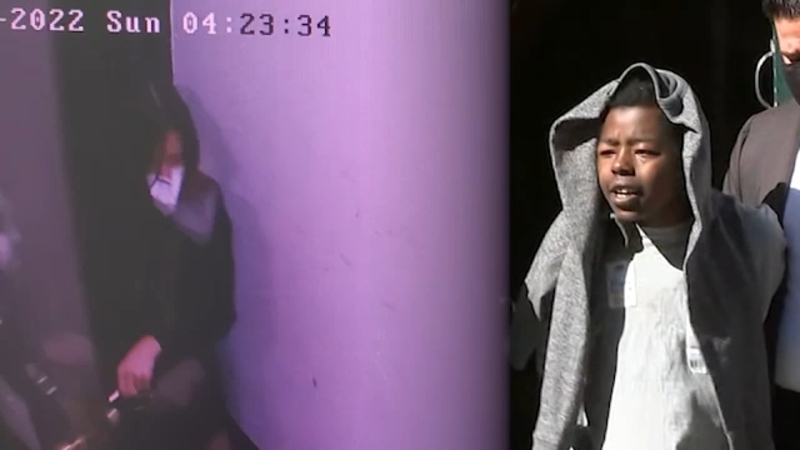 Grisly details revealed in murder of woman inside her NYC apartment

CHINATOWN, Manhattan (WABC) -- A man accused of killing a woman inside her apartment in Chinatown was officially charged and arraigned in court Monday night.

Assamad Nash, 25, pled not guilty to murder and two counts of burglary in criminal court.

The deadly incident happened early Sunday, when Christina Yuna Lee, 35, was walking from a taxi into her apartment. That's when Nash snuck in behind her. Surveillance video captured the moment.

The suspect, who is homeless, entered her apartment, grabbed a knife from the kitchen and stabbed her multiple times, police said.
EMBED More News Videos

Christina Yuna Lee was mourned at a vigil in Chinatown Monday, while the man accused of killing her, Assamad Nash, was charged with murder. Kemberly Richardson has more.

She was found in the bathroom.

"This is the most horrific scenario you can ever imagine," the building's landlord, Brian Chin, said. "She did nothing wrong. She entered, and he followed her. I'm angry. I'm devastated for this woman and her family, devastated, heartbroken for everyone in the building."

Neighbors said they heard screaming and called 911, and police said there are indications Lee fought back against her attacker.

According to the criminal complaint, Nash imitated a voice of woman when he was in the apartment and said they didn't need police.

Nash allegedly tried to flee using the fire escape but was forced to retreat, prompting a brief standoff with police before he was taken into custody.

According to the complaint, ESU found Nash hiding under a bed with a yellow-handled knife hidden behind a dresser.

It claims they also found Lee with stab wounds to her torso and that she was stabbed dozens of times.

Nash was also found with a stab wound to his torso and cuts on his hands and shoulders.

Prosecutors also said they will work to determine whether the Nash targeted Lee or committed the crime due to a racial bias. As yet, no such evidence has been found.

Nash is facing a sentence as high as life without parole. Prosecutors said he committed this brutal murder while he was out on supervised release on three open cases, including one where he punched a stranger on the subway. He has an extensive record in New Jersey.

Meanwhile, Yuna Lee was remembered at a vigil Monday morning in Manhattan's Chinatown.

"I and New Yorkers across the city mourn for the innocent woman murdered in her home last night in Chinatown and stand with our Asian brothers and sisters today," Mayor Eric Adams said. "The NYPD is investigating this horrific incident, and I thank them for apprehending the suspect. While the suspect who committed this heinous act is now in custody, the conditions that created him remain. The mission of this administration is clear: We won't let this violence go unchecked."

Lee worked as a creative producer for Splice.

"Over the weekend, our beloved Christina Lee was senselessly murdered in her home," the company said in a statement. "Our hearts are broken. Always dedicated to making beautiful and inclusive artwork, Christina is irreplaceable. As we start to process this tragedy, we ask that you remember Christina Lee as the magical person she was, always filled with joy. We wish peace upon her family in their grief."

Residents in the building were stunned.

"When I read that he tried to flee via the fire escape my heart dropped, because in order to get down here, you have to pass my window," one resident told Eyewitness News.

The vigil was billed as a rally against Asian American hate, and though police say there's no indication the victim was targeted because of her race, that hasn't calmed fears in the Asian American community.

"Michelle Go's murder, Christina's murder are not considered hate crimes, but that does not diminish the fear," community leader Grace Lee said. "The real fear that we as Asians, as Asian women especially, are feeling."

She continued saying, "It's very difficult to envision a future in this city with my daughters and knowing their normal life is going to be looking behind their back every time they walk on the street."

Nash has been arrested at least seven times since 2015, and six of those arrests have happened since May of 2021. He also has two attempted escapes on his record.

In the most recent arrest, on January 6, 2022, he was accused of damaging 27 MetroCard machines at the Herald Square, Penn Station and Second Avenue subway stations in a spree dating back to December 8.

Nash was due back in court March 3 to face charges in those incidents.