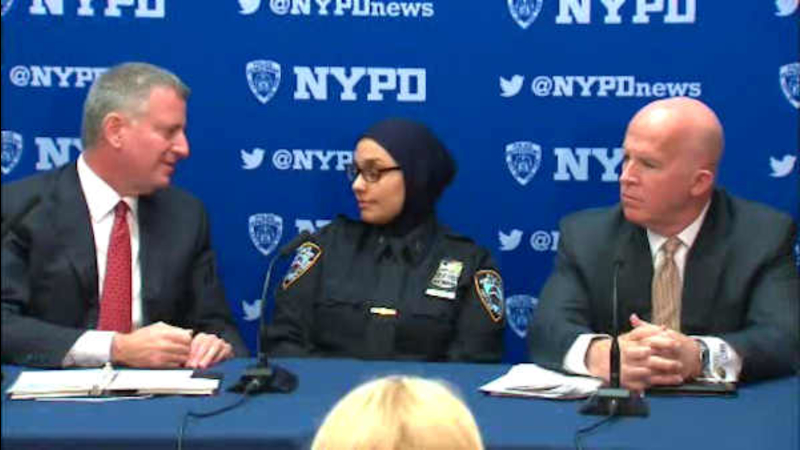 BAY RIDGE, Brooklyn (WABC) -- A Muslim NYPD officer appeared Monday with Mayor Bill de Blasio and Police Commissioner James O'Neill, who personally thanked her for her service after a Brooklyn man allegedly made a threatening rant directed toward her and her 16-year-old son over the weekend.

Police say Officer Aml Elsokary was harassed when she was dropping off her son in Bay Ridge Saturday night. She reportedly went to park the car, and when she returned, she said she saw a man yell at her son and push him.

Elsokary told police that when she intervened, the man called her ISIS, threatened to slit her throat and told her to go back to her country. After a brief manhunt, 36-year-old Christopher Nelson was arrested and charged with several hate crimes.

"I became a police officer to show the positive side of a New Yorker, a Muslim woman, that can do the job, that is non bias, that can help everybody," Elsokary said. "I'm born and raised here. I am here to protect everyone, and I know my department and my city is here to protect me."
The mayor and police commissioner echoed that support.

"I'm sorry this happened to you and your son," O'Neill said. "But with your help, we were able to make an identification, and we were able to arrest this man as quickly as possible. If anybody is thinking in New York City about engaging in this type of behavior, rest assured you will be identified, arrested and charged accordingly. There is no place for that in New York City."

The off-duty Elsokary was wearing her hijab at the time of the incident, but she was not in uniform and not carrying her service weapon. She did not identify herself as a member of the NYPD. She believes she was was targeted because she is a Muslim-American.
City officials hailed her as a hero in 2014 when she ran into a burning building to rescue a woman and her grandchild.

The deputy director of the Arab-American Association of New York says hate crimes against Muslim-Americans are on the rise.