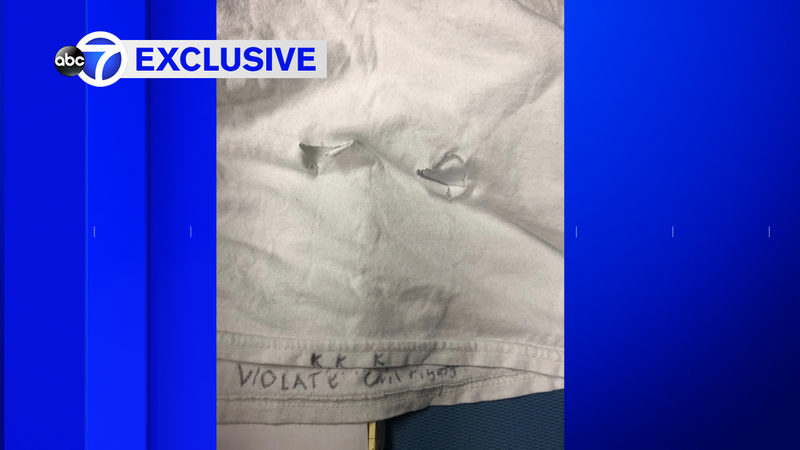 HEMPSTEAD, Long Island (WABC) -- The Nassau County Police Department's Internal Affairs investigators are trying to figure out who placed a white T-shirt with the words "KKK Violate Civil Rights" on top of a white police officer's locker in the men's locker room of the Hempstead Village Police Department.

"Obviously we're all upset about this, and we just have to follow the investigation and see where it leads to," Hempstead Village Police Chief Paul Johnson said.

The officer discovered the shirt Tuesday, August 14. Two triangles had been cut out of the shirt, resembling the hat of the infamous hate group. The words were written in a black marker on the seam of the shirt.

Eyewitness News was the only media outlet to obtain a picture of the shirt.

"The members are upset, they don't want this to happen," Hempstead Village PBA President Chris Giardino said. "We're going to continue cooperating with investigators, you know, until they can find someone who's held responsible for this."

"This is not something we would expect, certainly not out of law enforcement," he said. "We're going to do everything we can with Nassau County Police Department Internal Affairs to see if we can get a conclusion to exactly what happened and why."