No record for 926-pound New Jersey mako shark, but crew OK with that 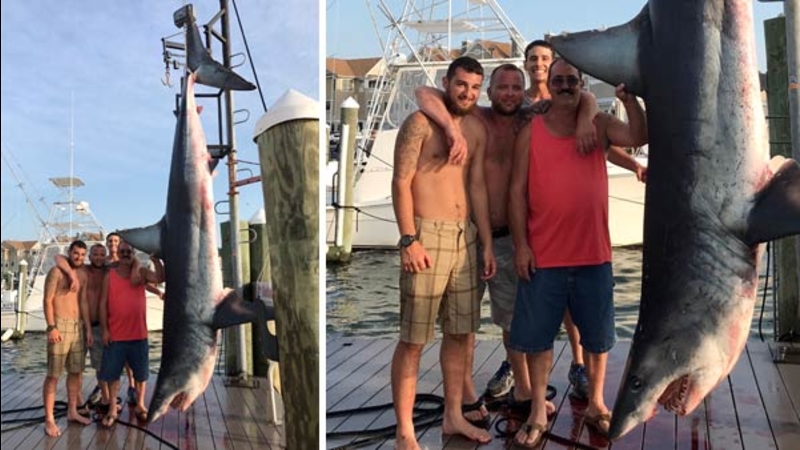 No record for 926-pound New Jersey mako shark, but crew OK with that

BRIELLE, New Jersey (WABC) -- A 926-pound Mako shark caught off the New Jersey coast won't be recognized as a state record because more than one angler helped catch it, but that's no bother to the excited crew that reeled it in.

The boat's crew was fishing about 100 miles off the coast in an area known as Hudson Canyon on Saturday. The shark was weighed and displayed in Brielle later that day.

"When I saw it, I turned around and looked at Dave and did the old cliche, we're gonna need a bigger boat," said Captain Kevin Gerrity, of The Jenny Lee.

The Miccio family and a friend snagged the 12-foot shark on an overnight fishing trip out of Manasquan last weekend, but reeling it in was a fight.

"It's pulling your knees into the boat, going to rip the rod out of your hand," Steve Miccio said. "Finally, I said, 'Someone's got to take this rod, I can't hold it."

"It was huge," friend Matt Lockett said. "I go scuba diving and I swam with sharks, but never seen nothing that big."

"We fought the fish for about an hour, and then it took almost another hour and a half to two hours to get the fish on the boat," Mark Miccio said.

The fishing rod snapped at the top during the battle to land the giant fish, and it took everyone on board but the captain to haul the monster into the boat.

One look at the fins and the frighteningly sharp teeth confirmed the catch.

This Saturday, July 22, 2017, photo was provided by Jenny Lee Sportfishing, whose crew reeled in a 926-pound Mako shark in Brielle, N.J.

"By the time we reeled it in, I started shaking," Bill Miccio said. "Once I saw it, we knew it was a shark, and it was just unbelievable."

In order to qualify for an official state record, the rules say only one person is permitted to reel the fish in -- it can't be the product of teamwork. But that's OK with Steve Miccio.

"I'm not worried about having my name in the book or anything," he said. "We all had a hand in it."

The giant shark has been filleted into almost 400 pounds of meat. None of it will go to waste.

"It's all cut up, and we divided it up between everybody," Matt Miccio said. "We're giving it away to whoever wants to try it. We're having a party at my house Friday."