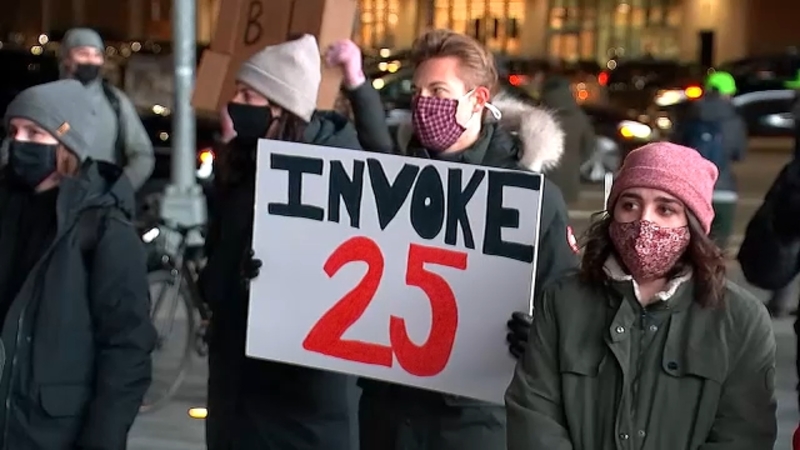 NEW YORK (WABC) -- Both New York and New Jersey are stepping in to help with a peaceful transition of presidential power, this as local politicians continue to condemn President Donald Trump and prominent Republicans amid accusations of inciting violence in the riot at the Capitol on Wednesday.

Senate Minority Leader Charles Schumer called for Trump to be immediately removed from office, saying it was imperative to invoke the 25th Amendment or proceed with impeachment.

"What happened at the U.S. Capitol yesterday was an insurrection against the United States, incited by the president," Schumer said. "This president should not hold office one day longer. The quickest and most effective way - it can be done today - to remove this president from office would be for the Vice President to immediately invoke the 25th amendment. If the Vice President and the Cabinet refuse to stand up, Congress should reconvene to impeach the president."

Schumer also said he will fire Senate Sergeant-at-Arms Mike Stenger if he hasn't vacated his position by the time Democrats take the majority this month. The sergeant-at-arms oversees the Capitol Police.

"Sen. Cruz, you must accept responsibility for how your craven, self-serving actions contributed to the deaths of four people yesterday, and how you fundraised off this riot," she wrote on Twitter. "Both you and Senator Hawley must resign. If you do not, the Senate should move for your expulsion."

New York Democratic Chairman Jay Jacobs took it a step further, calling on the four local House members who supported the attempt to block the vote certification to also step down.

"Representatives Lee Zeldin, Nicole Malliotakis, Elise Stefanik and Chris Jacobs have not only violated their oath of office, they have disgraced the districts and state that they represent," he said. "I call on all four to resign today. Supporting a lie that you know to be false has consequences, as we can see clearly today."

"Yesterday, New York Republicans swiftly and in no uncertain terms condemned the violence that occurred at the U.S. Capitol building. That is more than I can say for Andrew Cuomo and New York Democrats, who for months last summer, stayed silent and gently encouraged rioting, violence and destruction of cities across our state. Dangerous criminals, emboldened by Democrat policies and anti-police rhetoric were given free rein to express their 'frustration' while New Yorkers trembled in fear as anarchy gripped their cities. Law enforcement was under siege, businesses were burned to the ground and innocent New Yorkers became victims of violent attacks."

A peaceful transition of power is the cornerstone of our democracy & NY stands ready to help ensure the will of the American people is safely carried out. pic.twitter.com/3AStpH4B9Y

Murphy also announced that he would send 500 National Guard members.

The National Guard members are expected to remain in Washington, DC until after the Inauguration.
EMBED More News Videos

In a conference call Thursday, Cuomo addressed the violence at the Capitol.

Murphy also shared some scathing words about those who took part in the rioting.

"They aren't patriots," he said. "They are the antithesis of what it is to be an American."

The scene that unfolded yesterday in the Capitol Building will go down as one of the darkest days in our nation’s history.

This was not a protest. It was an act of domestic terrorism spurred on by the president himself and his minions.

New Jersey Congressman Andy Kim saw the damage inside the U.S. Capitol and began cleaning up the mess left behind by those who stormed the building.

Kim sheltered in place in his office on Capitol Hill after getting alerts that the demonstration had gotten out of control.
EMBED More News Videos

Anthony Johnson interviews local politicians for their reaction on Wednesday's siege on the US Capitol.

Anti-Trump demonstrators gathered at the Barclays Center Thursday night with renewed anger in response to the violence that took place at the Capitol on Wednesday.

Of the two protests on Wednesday, one took place outside Trump Tower, where eight people were arrested.

Another took place in Columbus Circle and was largely peaceful. It lasted until about midnight.

Those taking part were anti-Trump demonstrators who had gathered to protest what they saw playing out in Washington.

An internal memo warned the NYPD to be on alert following the situation at the U.S. Capitol.