WABC
By Kim Dillon
BRONX, New York (WABC) -- The family of a teenager stabbed to death inside a New York City classroom has released additional cellphone video of the chaotic events that led to the young man's death.

Abel Cedeno, is charged with manslaughter and assault in the death of Matthew McCree.

Prosecutors said Cedeno fatally stabbed his 15-year-old classmate and another student last September at the Urban Assembly School for Wildlife Conservation in the East Tremont section of the Bronx.

On Friday, McCree's family, and their attorney Sanford Rubenstein, released a 27-second video in which Cedeno can be seen charging toward McCree with a knife in his hand.

"It is unfortunate misrepresentations have been made with regard to what this video actually shows," Rubenstein said.

An attorney for Cedeno, earlier this week, released cellphone video the last nine seconds of the same video. Then, they told Eyewitness News it appeared to be a group of students surrounding and punching Cedeno before the stabbing.
McCree's mother, Louna Dennis, said looking at the video is like reliving her son's death over and over.

"It's not one day that goes by that I don't cry for my son," Dennis said.

Cedeno, in an exclusive interview with Eyewitness News in December, said he took a knife to school because he had repeatedly been bullied.

Robert Feldman, the attorney for Cedeno, said McCree came at his client from 50 feet away after taunting Cedeno.

"There are no 'alternative facts' here," Robert Feldman said. "The truth speaks loudly."

The New York City Department of Education announced in December that the Urban Assembly School for Wildlife Conservation would close. 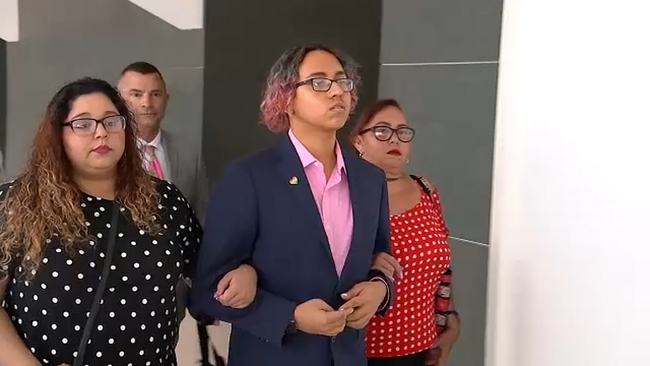